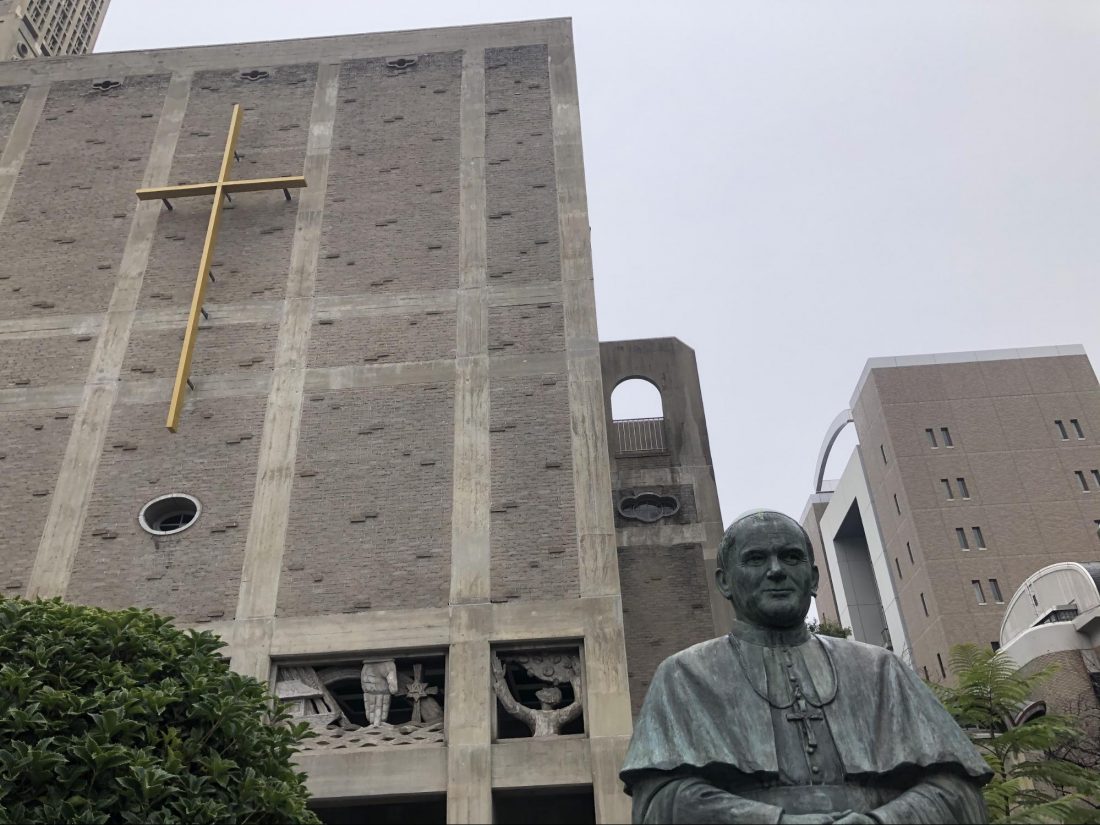 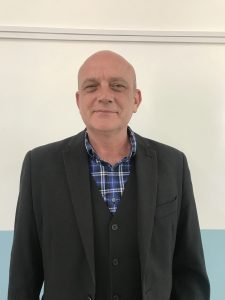 Noboricho Catholic Church, also known as the Memorial Cathedral for World Peace, is unlikely to be chanced upon by luck. Despite its generally impressive size, including a 45 metre bell tower, it is surrounded by largish buildings on 3 sides, and you really need to be looking for it in order to find it. It is located in a fairly nondescript part of town, although not far from the river and Hiroshima station, and the main shopping drag. 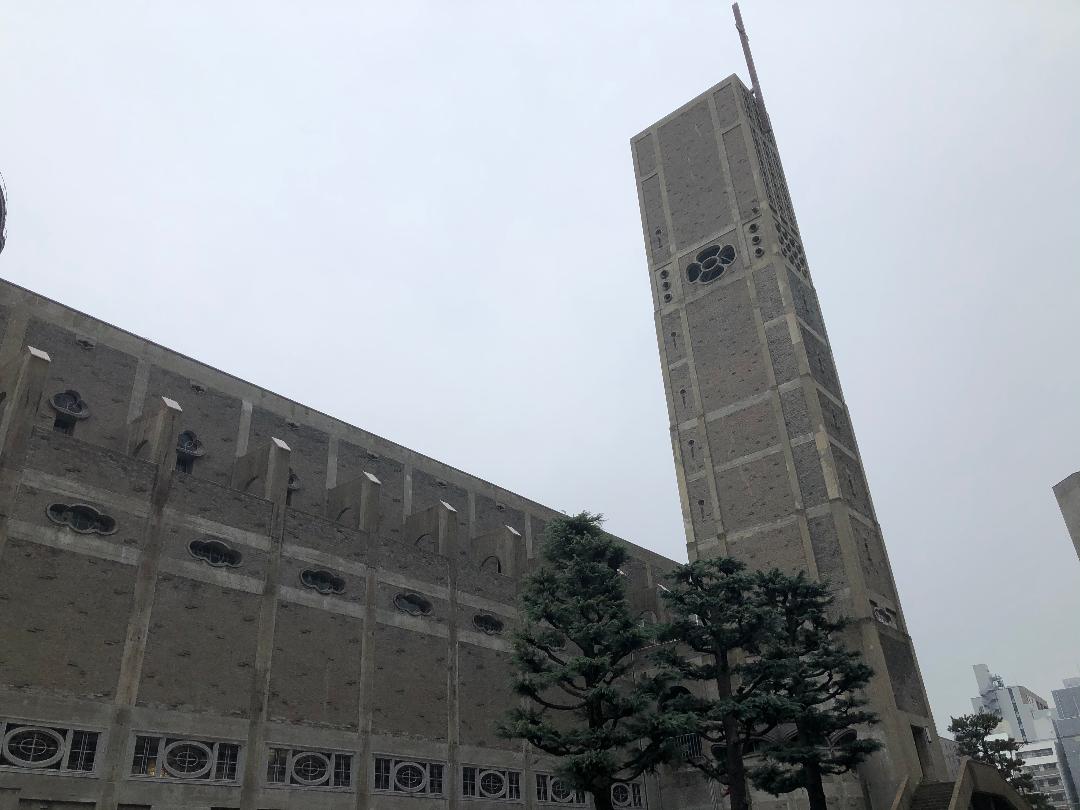 Researching online before making the trip, I learned a couple of salient points about the cathedral’s construction. The building was initiated by a Jesuit missionary, Hugo Enomiya-Lassalle, who had been working as pastor for the Noboricho parish (or, conflictingly, the vicar of Hiroshima) when the bomb was dropped in August 1945. He was critically wounded but survived, and made it his mission to raise the cathedral on the ruins of his church, as a monument to love and peace, and as a memorial to the victims of that crime. Secondly, the tower was designed to resemble the A-bomb dome, although I would never have made that link had I not read it. Togo Murano was the chief architect.

The construction materials are reinforced concrete and steel. There are elements of traditional Japanese architecture, such as the post-and-beam concrete frame with interior panels, and the shapes of the tower windows. There is even a nod to Byzantium, through inclusion of a main circular dome and 2 cylindrical side chapels. The tower includes bricks made from earth containing ashes from the bombing. The surface of the exterior is rough, grey and harsh. 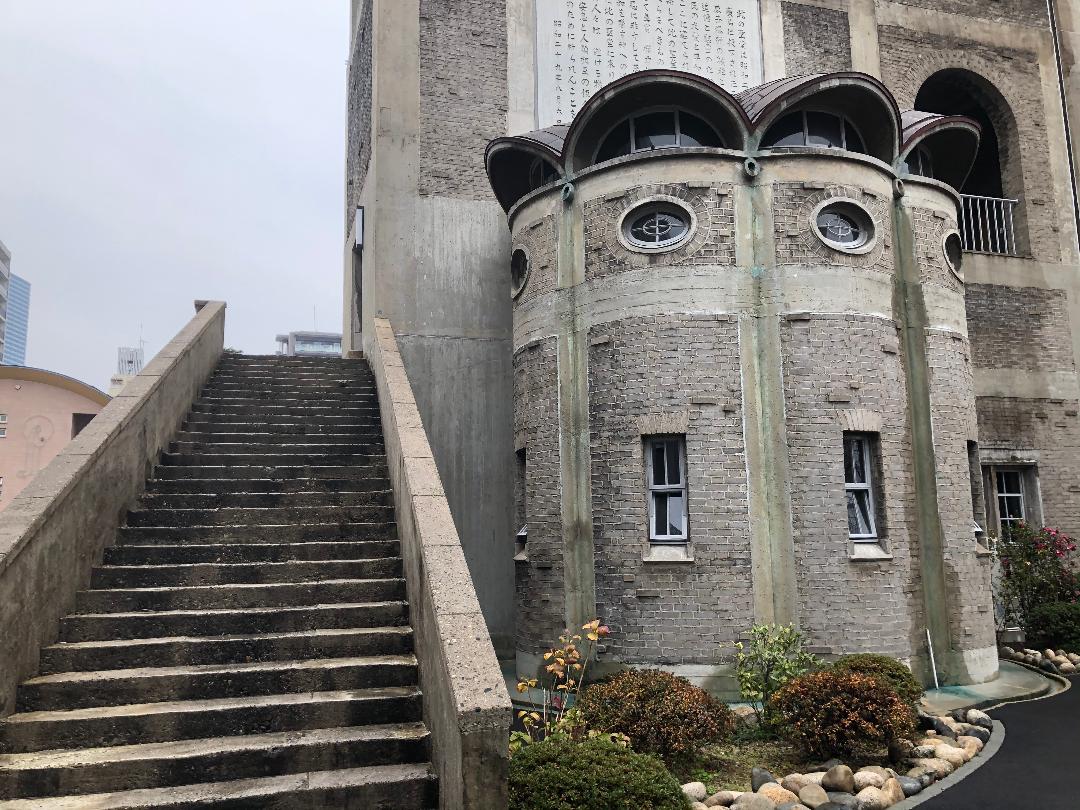 In contrast, the garden served to soften this impression. There was a cute nativity scene in place, as we visited around Christmas time. 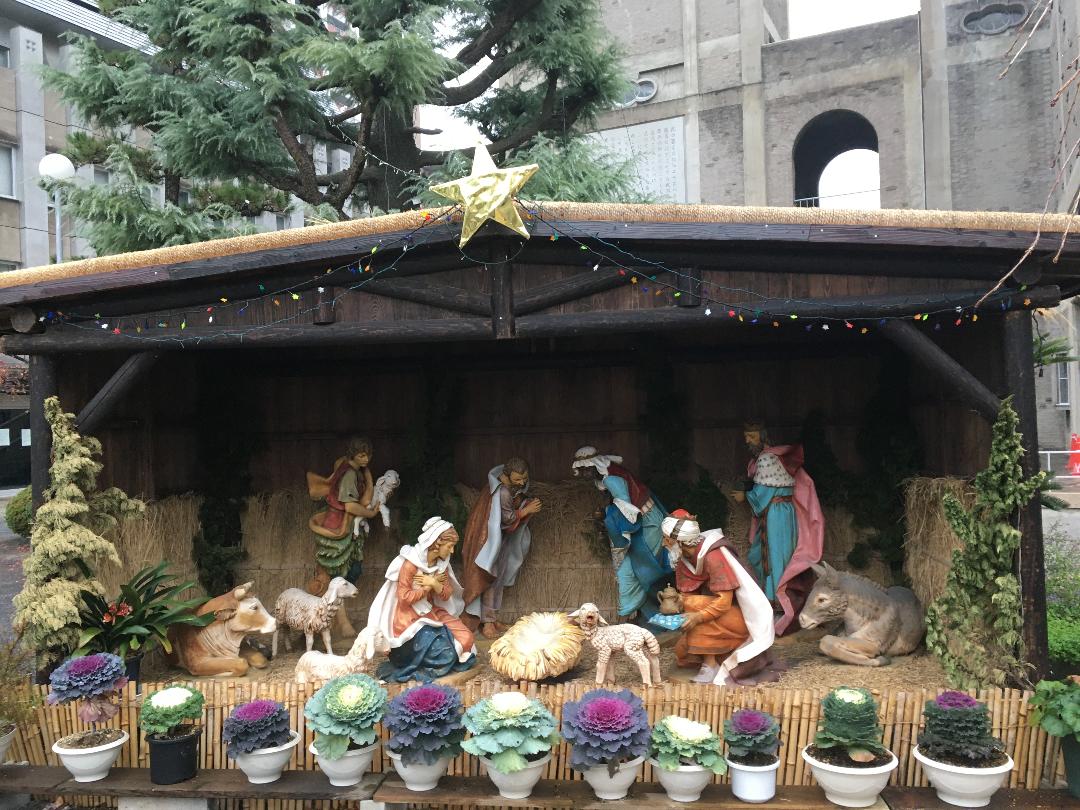 The main doors are impressive slabs of bronze and the stone sculptures above and outside them were created by Kenji Imai. 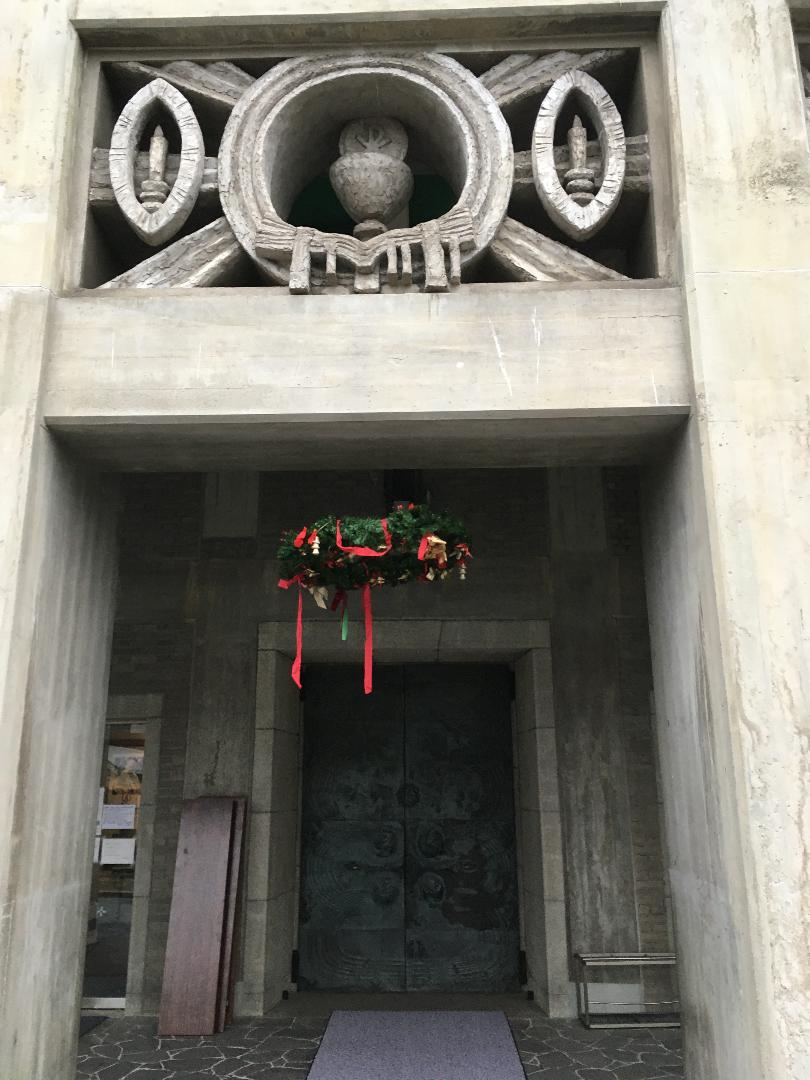 At this point, the curator came out for a chat, and he stated that the sculptures represented the 7 Sacraments. On closer inspection this wasn’t entirely clear, as Noah’s Ark, for example, doesn’t seem to fit. 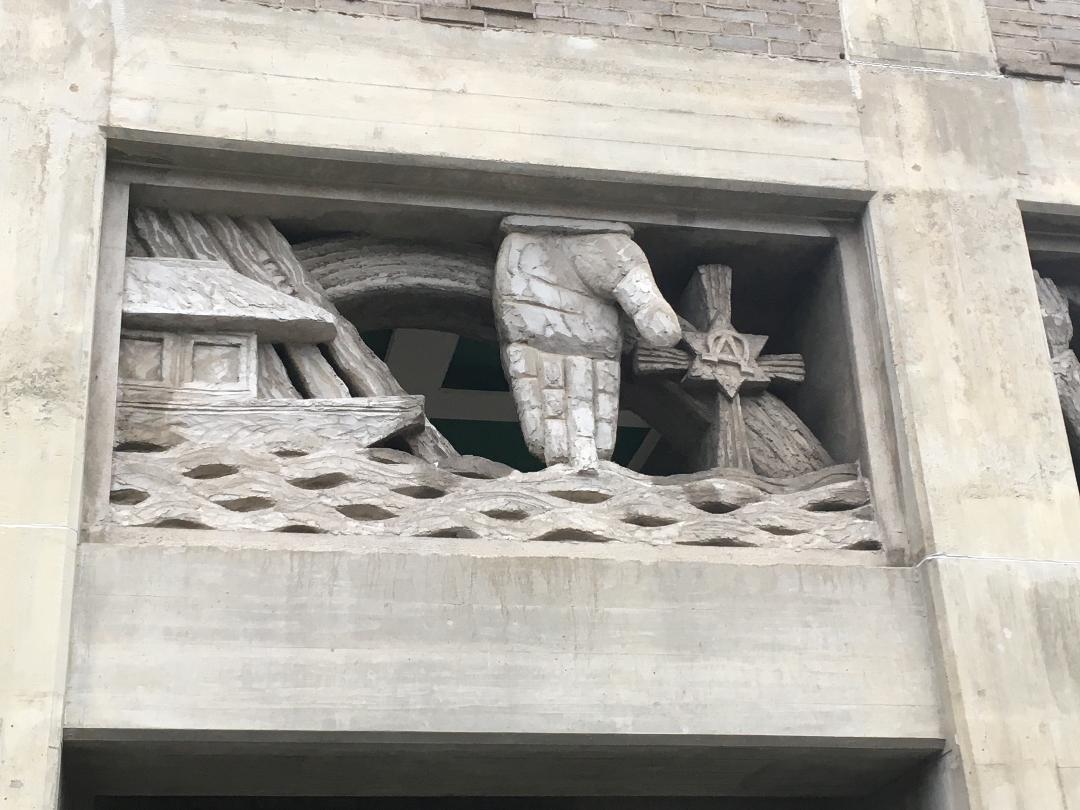 Overall, you would be hard pressed to consider this an exceptionally pretty church (at least externally). There is no delicate or subtle stonework, no play of light or colour, no soaring spires. It is, rather, a solid and enduring structure that suggests the determination of the builders and the supporting community to rise above their tragedy, both physically and spiritually. It is fitting, then, that a phoenix sculpture adorns the roof.

We moved inside, and I spent the first few minutes looking for the holy water to bless myself, but it had been removed due to Covid. There is the baptismal font in a side chapel on the right, then the confessional boxes. I thought I would start by explaining the 14 Stations of the Cross to my son. These are simple but effective ceramic tiles: here is Simon of Cyrene helping Jesus to bear the cross. 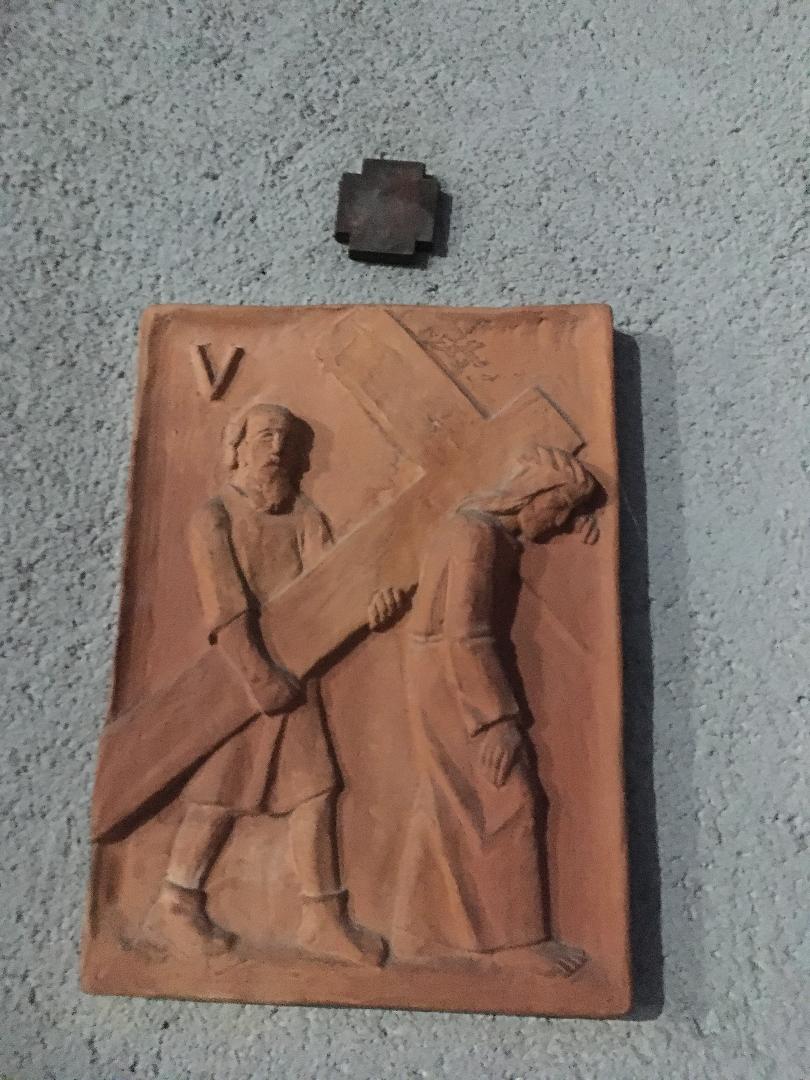 The stained glass windows, which depict the 15 mysteries of the rosary, are impressive and flood the interior with an abundance of colour. 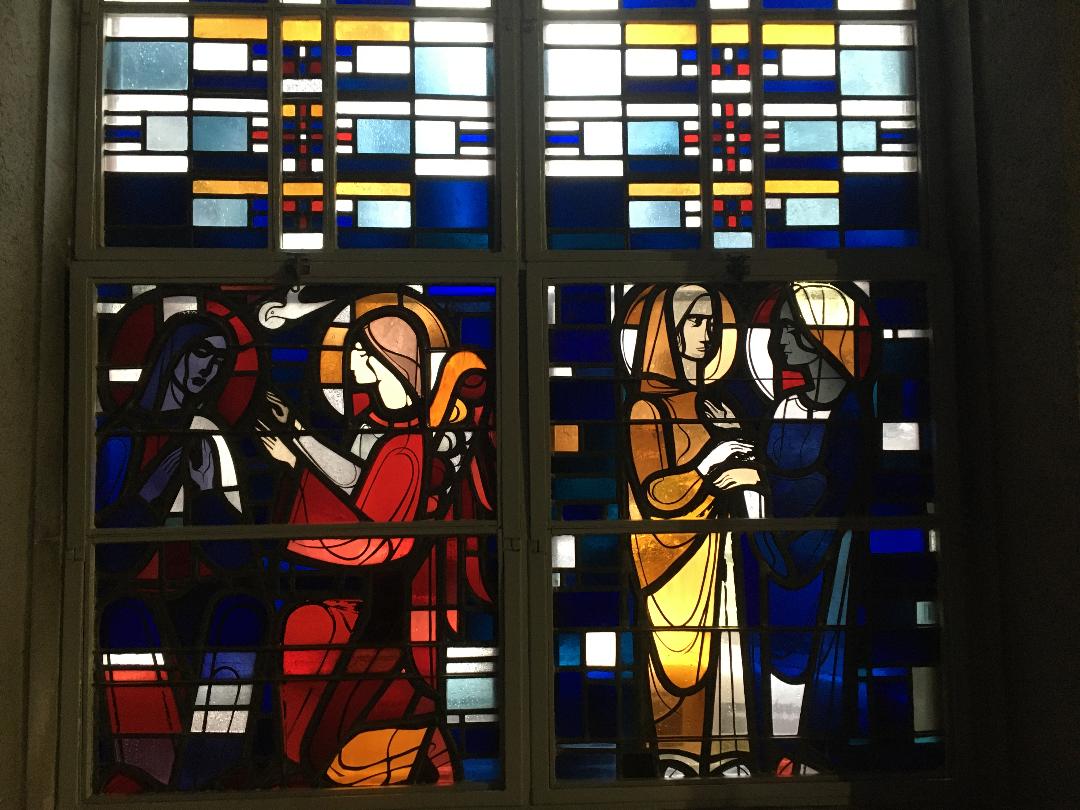 There are also windows high in the nave, which help to accentuate the sensation of space and weightlessness. 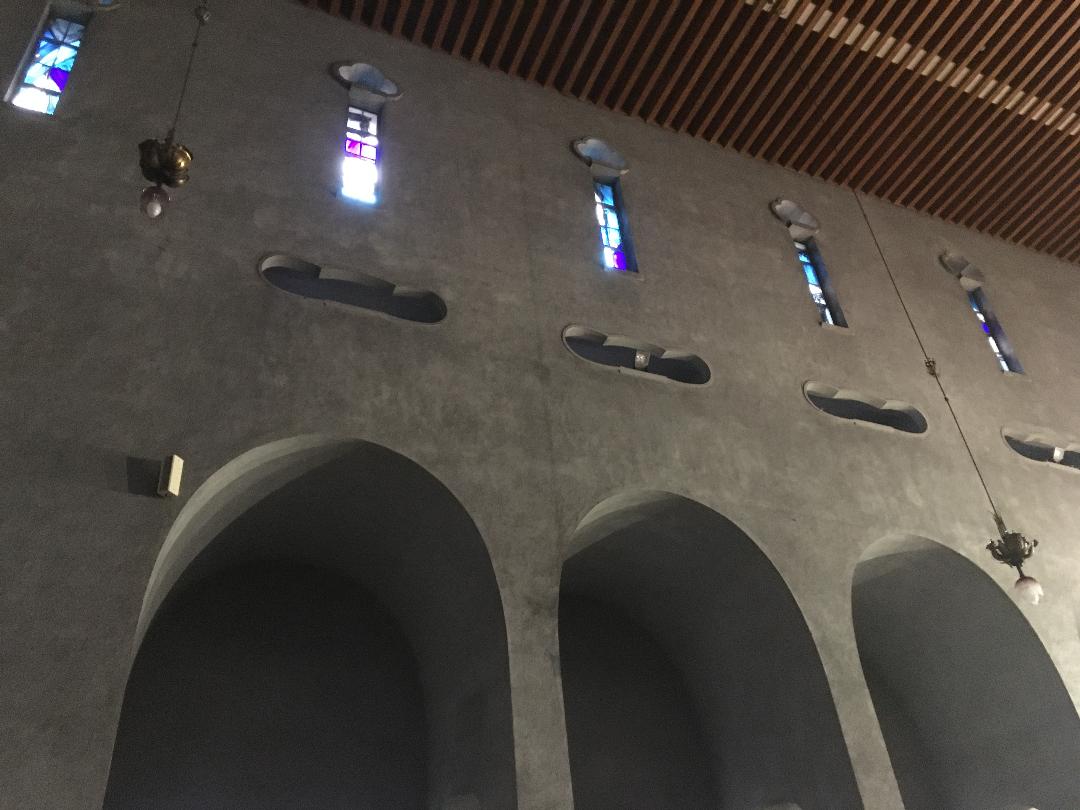 The altar area is really beautiful. There are 3 bright windows, which highlight the central feature of the altar at a small scale. Zooming out, there is a large mosaic of Jesus and the Cross (incidentally donated by the Chancellor of West Germany). 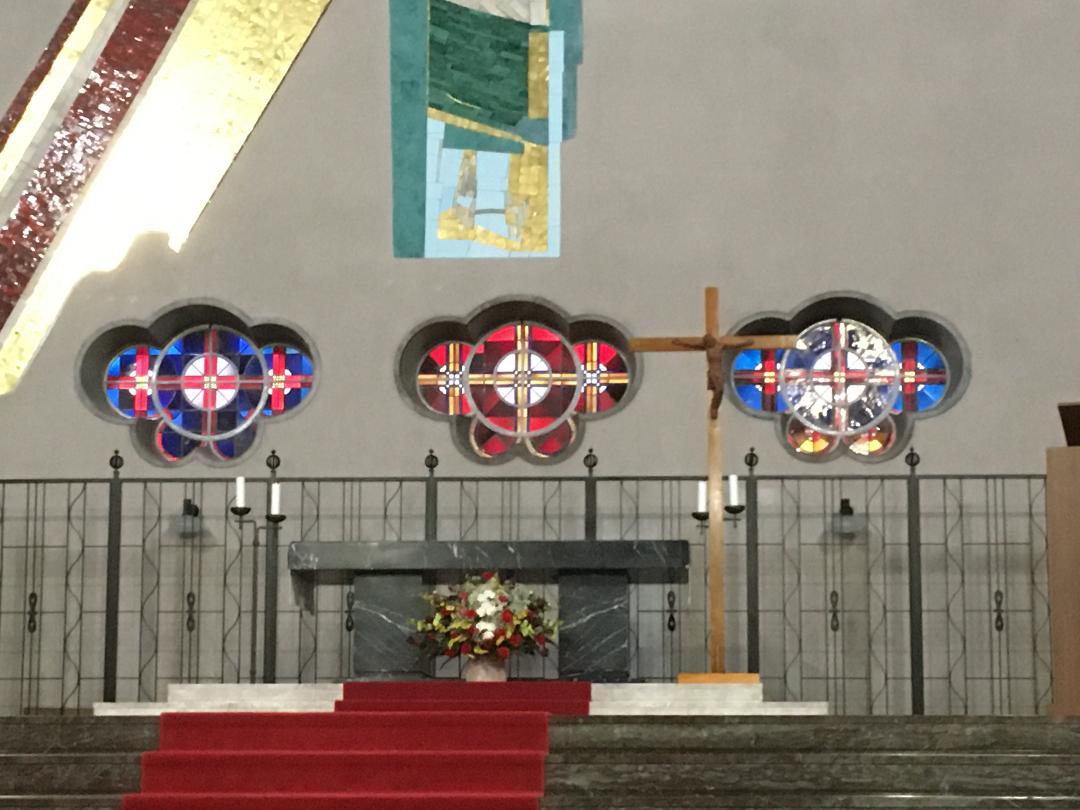 A statue of Our Lady has a prominent position to the right of the altar. Me and my son knelt for a quick prayer. It was good to see her given such respect: I learned later that the church is also known as The Cathedral of the Assumption of Mary. 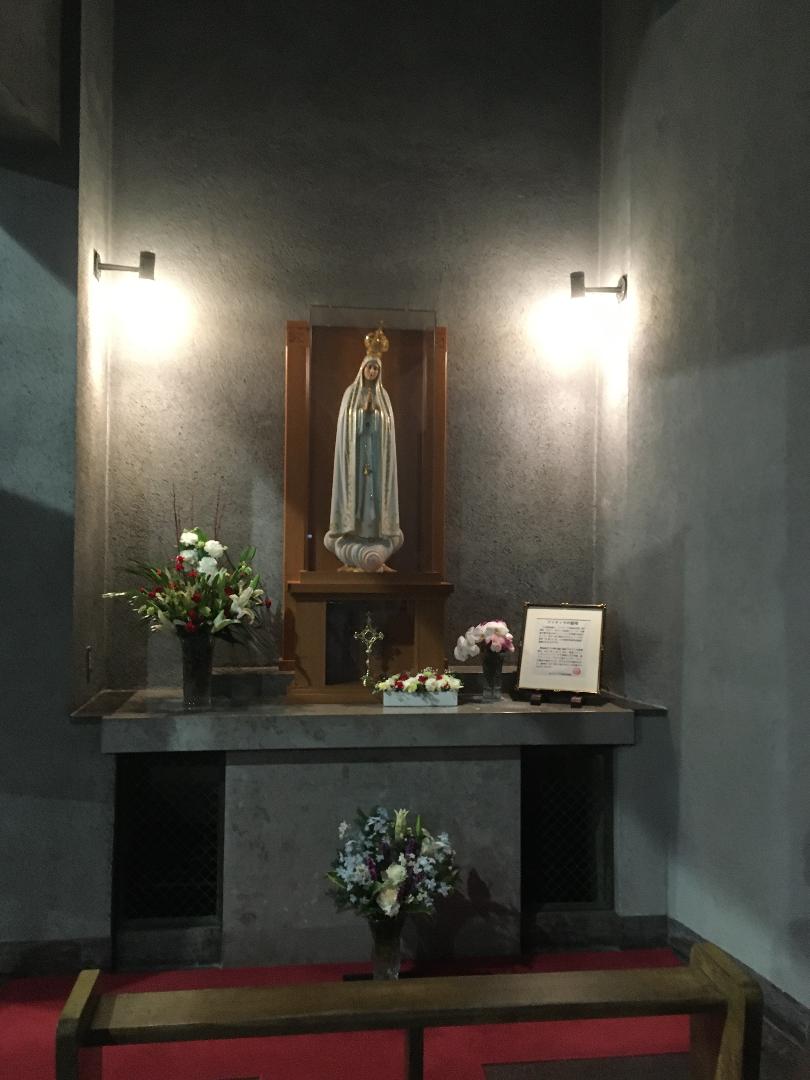 Other features include a massive pipe organ at the back of the church directly opposite the altar, and a pulpit which seems more in keeping with the Protestant rather than the Catholic tradition. During our visit, it was being rigged up for a Skype service. Finally, we visited the side chapel before exiting the church. 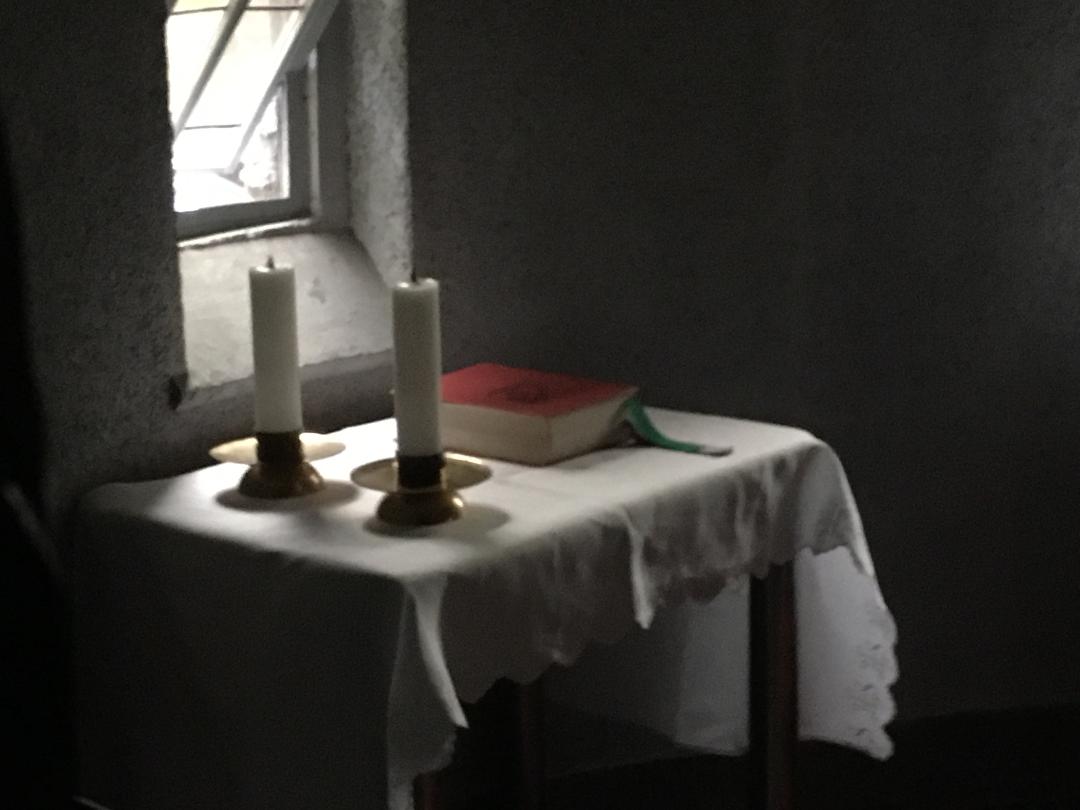 EFFECT ON THE VISITOR

It is notable that both the architect, Togo Murano, and the sculptor, Kenji Imai, converted to Catholicism later in life. Interesting too that Reverend Lassalle, whilst maintaining his Christian belief, became a Roshi or Zen master. This lends credence to the idea that the future of humanity lies neither in the West nor the East, but perhaps through a melding of the two belief systems and spiritual practices.

As for myself, visiting Noboricho Cathedral was a moving experience. The ambience of this place added confirmation to my growing thesis about the people of Hiroshima. These people, who literally had Hell rain down upon them from the sky, have refused steadfastly to surrender to feelings of revenge, hatred or any other negativity. Quite the opposite: at every turn, you see them dedicating themselves to the work of promoting forgiveness and peace, to turning their horrifying history into a vehicle for positive renewal. The church is a compelling symbol of that narrative. 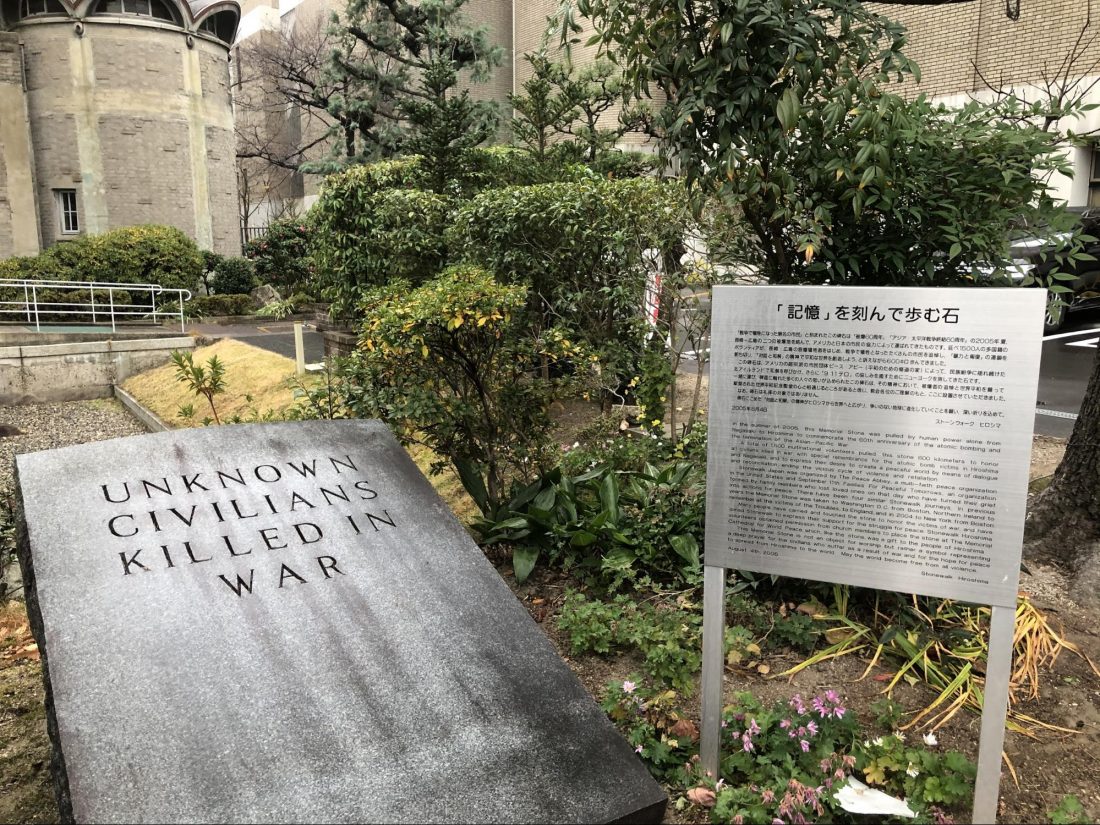 As mentioned, I visited the Cathedral with my son who is a “double”, fully Japanese and fully English. The following is his impression. “There wasn’t any holy water and there were spaces between seats due to the Covid outbreak. It was interesting to see a religious building being affected by the virus, and the precautions being used against it. The building itself was interesting, with a mixture of curves and straight lines, and there are many differences to the church in my hometown (St. Xavier’s in Yamaguchi city). The stained glass behind the main hall was very beautiful and mesmerizing. They sell the guide of the church (history of the church, the meaning behind the sculptures and the creation of the church) for 500 yen in the nearby shop. It was interesting to see the small Japanese garden in front of the church.” 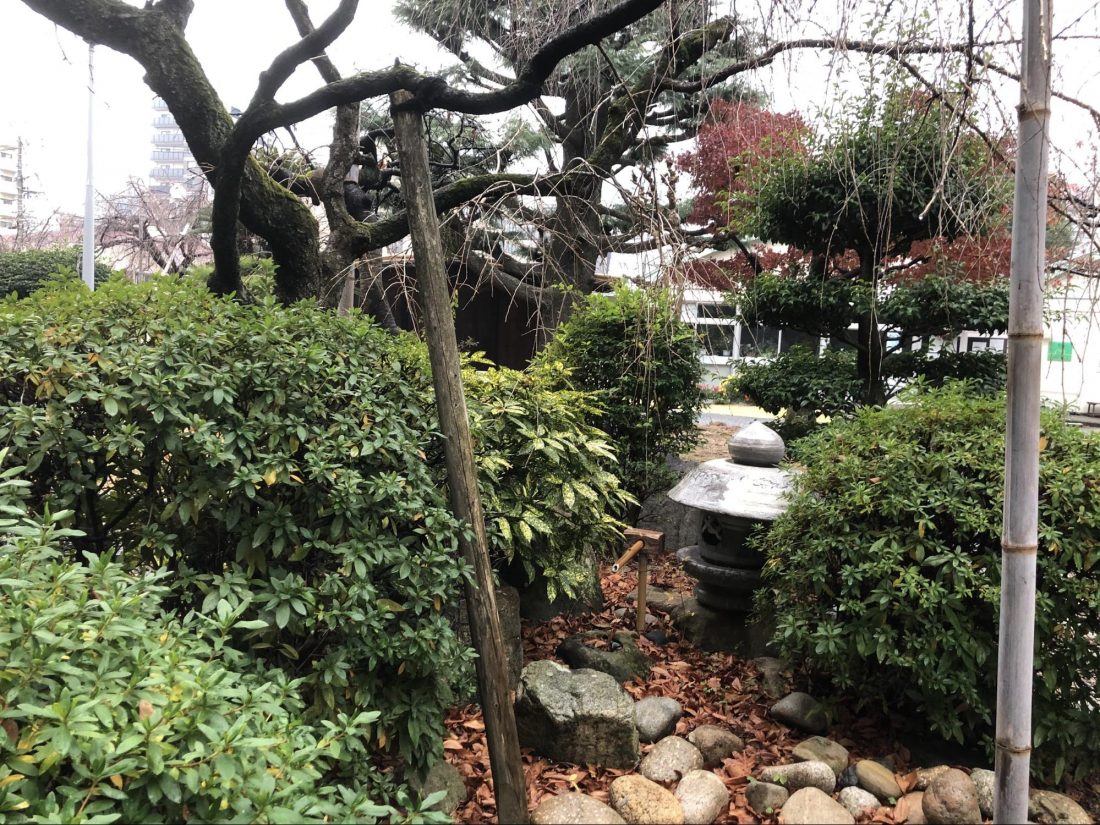 Pope John Paul II visited the Cathedral in 1981. In his words: