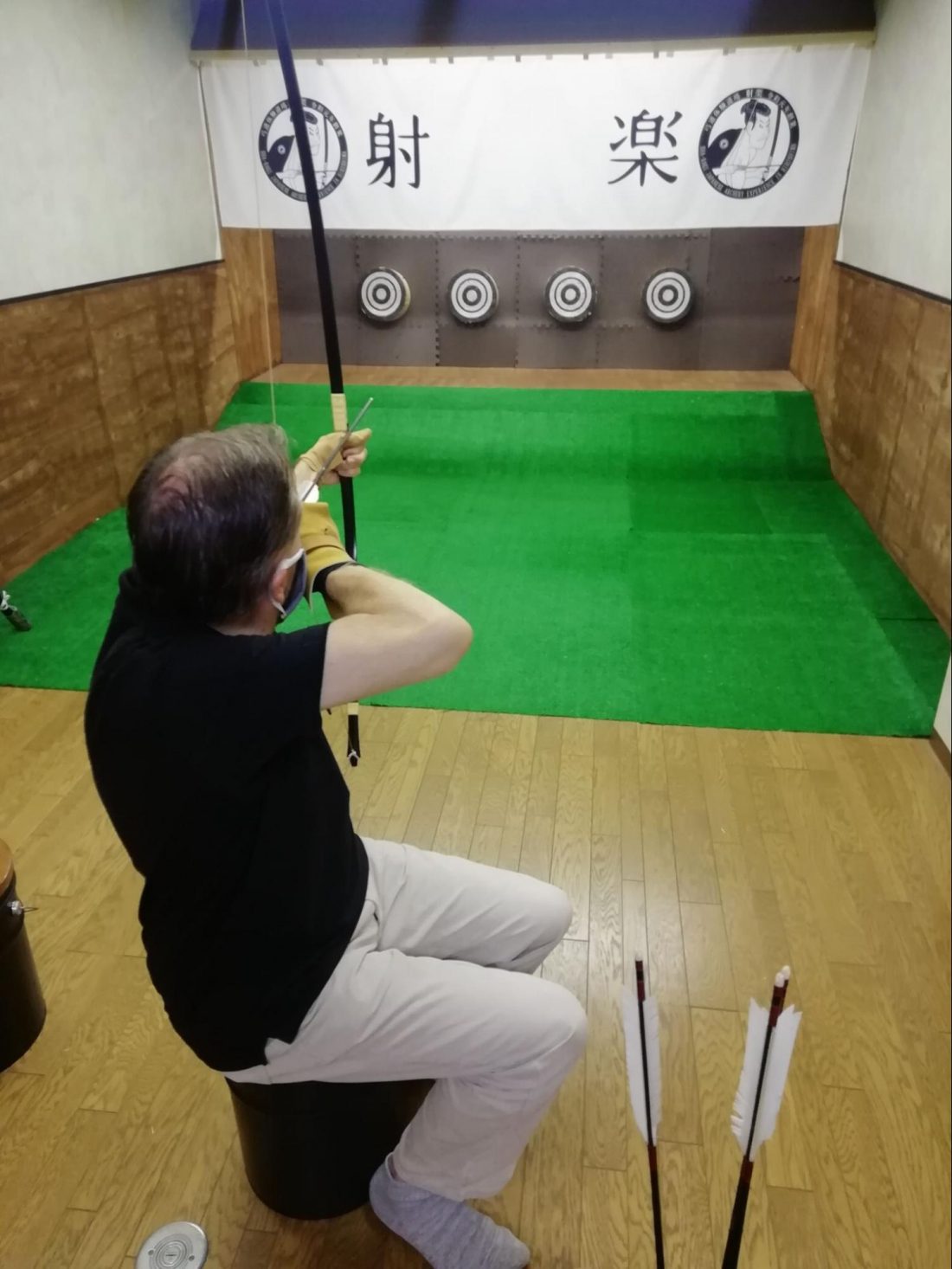 You, too, can be a Samurai.

Well, a traditional Japanese archer, at least. Call it Samurai training, if you will.

I think it’s fair to say, for tourists and residents alike, however modern and technological Japan becomes, the allure of its feudal past remains strong. Samurai and ninjas and the like capture the imagination of millions around the world.

Here in Hiroshima, you can get the slightest taste of that past in the most surprising of places. Sharaku, Kyudo “Japanese Traditional Archery” Experience, can be found right on Hondori, the shopping street in the center of town, just a three minute walk from the Hiroshima Peace Memorial Park and the Atomic Bomb Dome.

Tucked up on the third floor, up a narrow staircase, above a clothing store, it’s very easy to miss even while looking for it. But the experience itself is one that cannot be missed, and will be long and easily remembered. 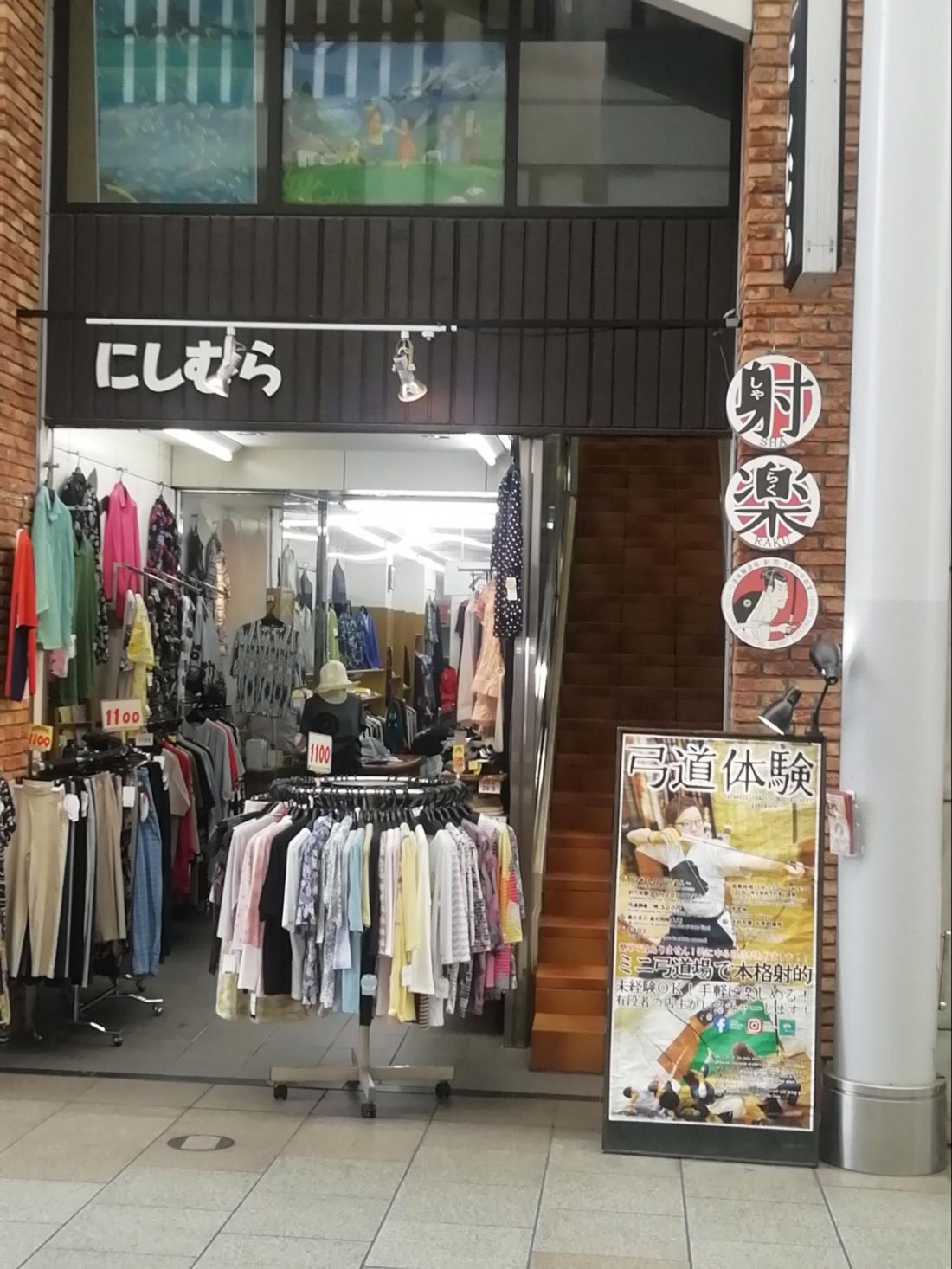 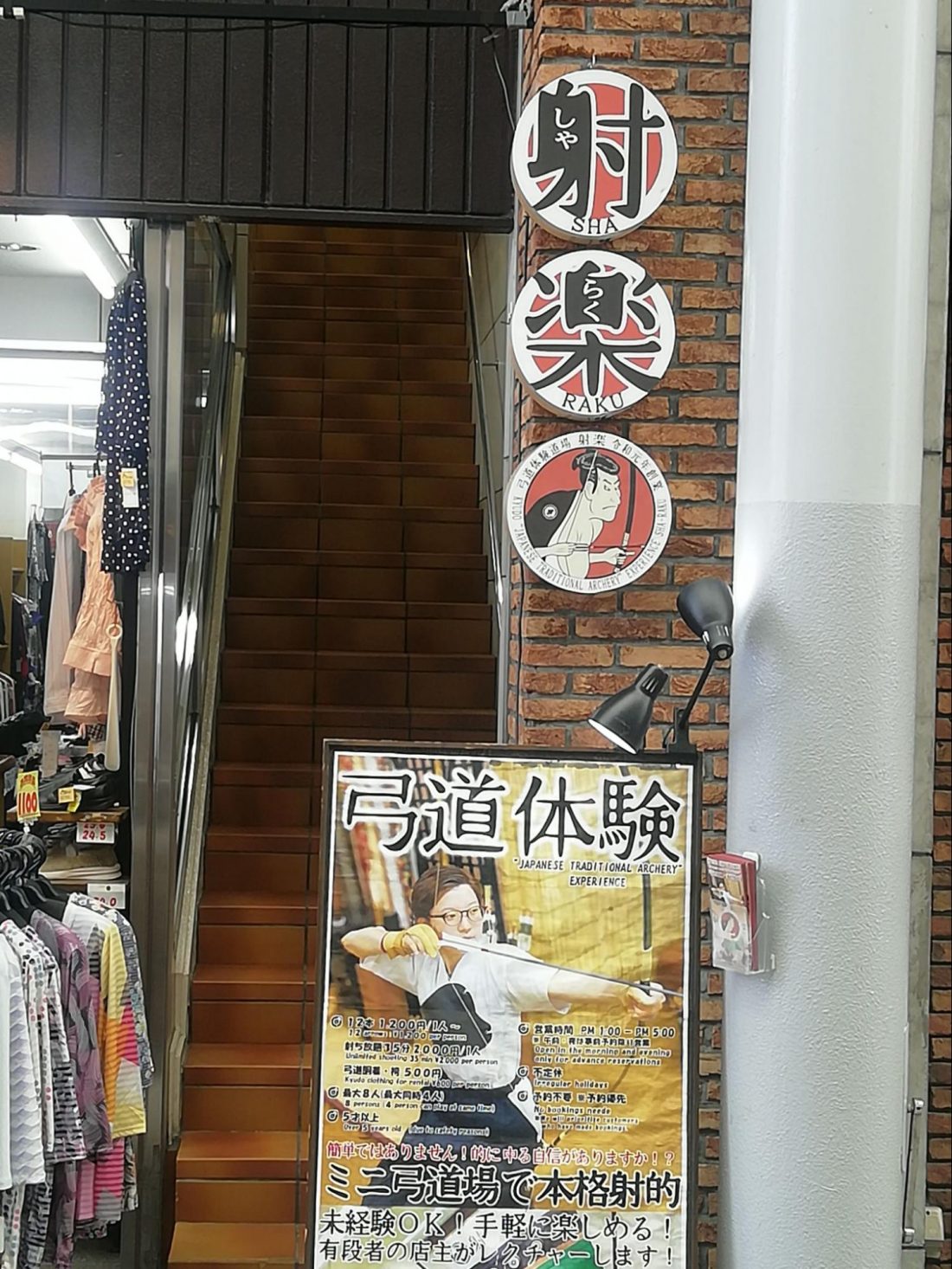 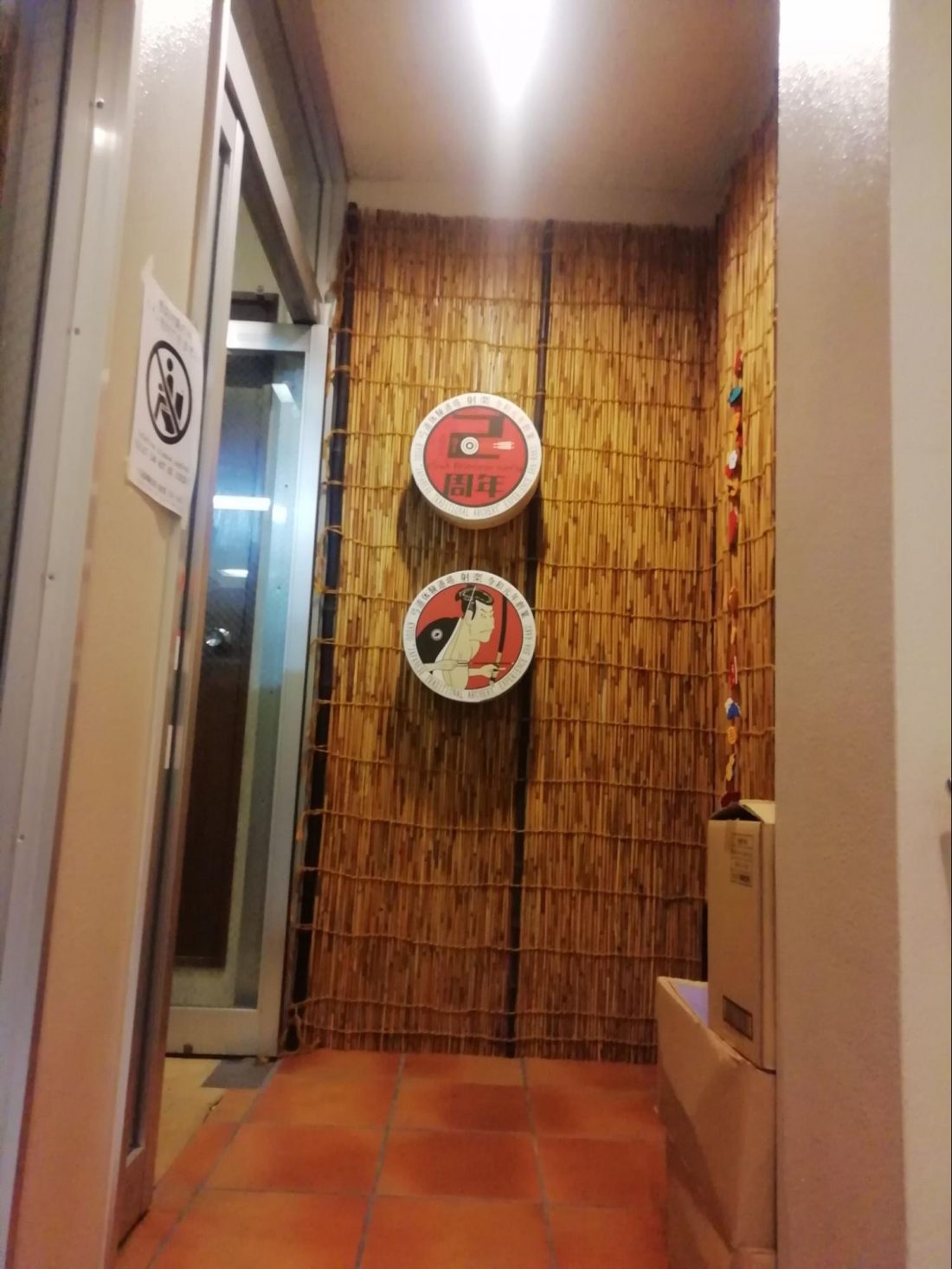 Owner Kin Kenji was personable and right to the point. Within five minutes of agreeing to a trial of 12 arrows and paying up front, I was properly gloved and being treated to a short history of Japanese Kyudo. Interestingly, the gloves, one for each hand, only cover the parts of the hands that touch the arrow. The one on the left hand only covers thumb and index finger, for example, leaving the rest of the hand free.

I was then shown a true samurai’s bow. It stands two-meters, 20 centimeters tall (seven-foot, two-inches) and having a draw of 20kg (45 pounds), it’s for veteran adults of the sport only. It was fun to attempt the pullback once though, before it was protectively taken back from me again. The beginner bow, also the traditional bow of a Japanese archer in battle, with a history of over 400 years, has just a four-kilogram (nine-pound) draw and was truly fairly easy to wield.

As an aside, I’ll admit that even the brief comments on history from Mr. Kin stoked my curiosity enough that I was on Wikipedia within a half-hour after my experience was over. I believe the 400 years he referenced to me were the emergence of the Japanese long bow in the 1100s until the Portuguese introduced firearms to Japan in the 1500s. From then on, archery became more of a ceremonial court competition. Kyudo, as the sport exists now, was mostly codified after World War II as a means of preserving traditional archery.

Next it was time to learn how to grip the bow, nock the arrow, and the technique for release. As the brochure states, “The main difference of kyudo and western archery is that, in kyudo, every movement follows a traditional routine that pays respect to the equipment and to the opponent.” The Nippon Kyudo Federation says “seisha seichu”, or correct shooting is correct hitting. Shooting correctly will result inevitably in hitting the target. So I felt the imperative to pay attention closely and do it “the right way.” As in many things in Japan, there is a “right way,” and the “way” is the goal, as much or more than the result. Learning and following this way does indeed help deepen your connection to the culture. 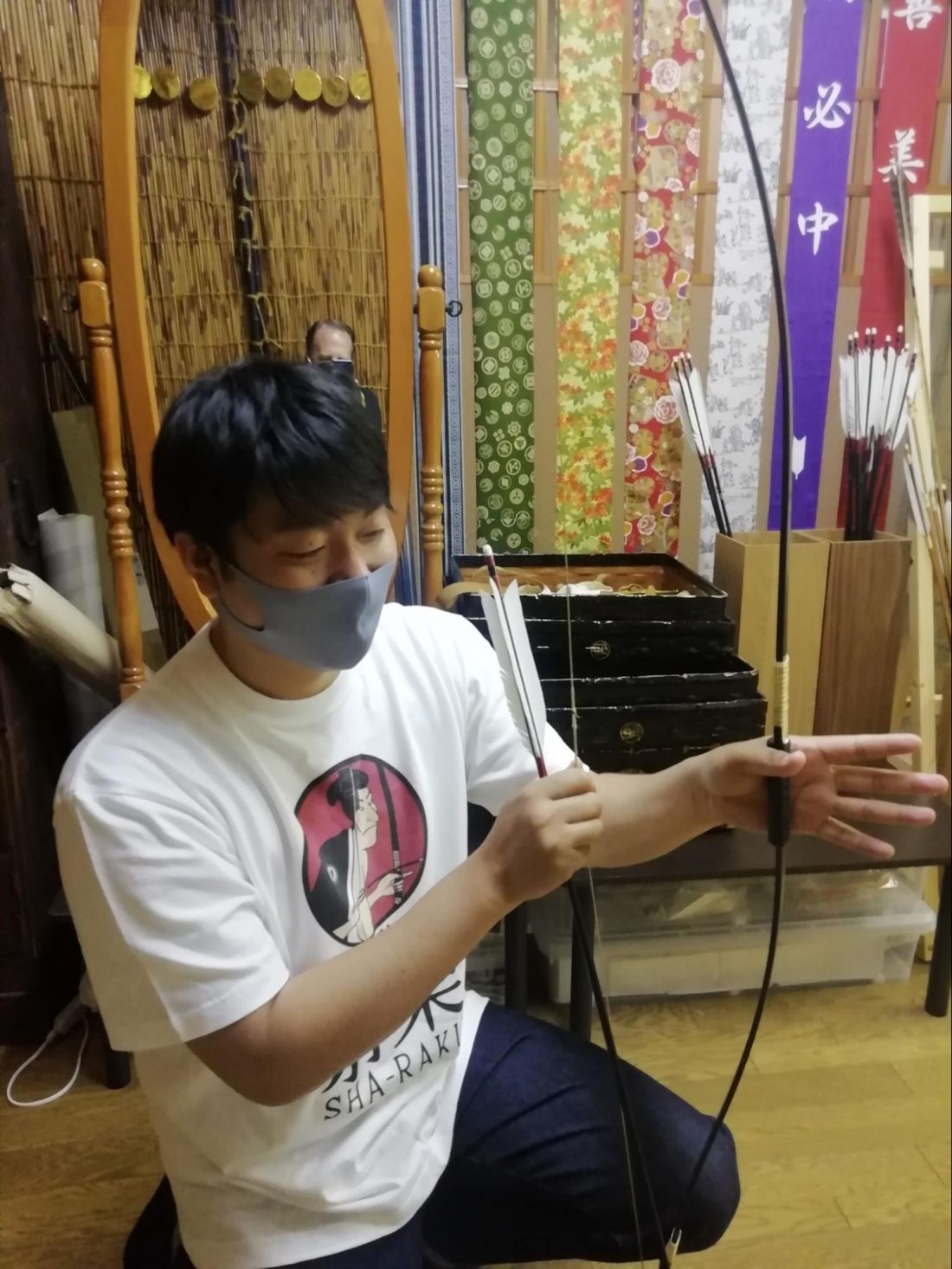 With that it was already off to the targets. Mr. Kin does not speak English himself, but told me that with most foreigners he will pull out a translator device, and the rest is done with gestures and patience. I can attest that it’s really not too difficult to understand.

With respect to the brochure, I found two differences to western archery that impacted me, only one of which was connected to the traditional routine. The first was my childhood romantic notions of Robin Hood, pulling bows from his quiver and firing them over and over with rapid speed. There is no rapidity in kyudo. The attention to the traditional techniques requires a slow pace. Especially for beginners, of course, but a quick look at YouTube for Kyudo masters clearly shows the deliberateness and attention to technique that shocks the Robin Hood image clear from your mind. I had heard before going that true kyudo involves breathing techniques and also the “emptying of mind” before release, none of that was even brought up here. After all, it’s meant to be a fun beginner’s experience, not a true initiation into a full club membership. (According to Wikipedia, the International Kyudo Federation has 132,760 members). In fact, if it were following strict kyudo lesson protocols, students would not even be allowed to release the arrow until mastering all the preparation and basic techniques. There are officially eight proper steps involved in the shooting to be learned. We can be thankful Mr. Kin has bent those rules to allow this unique experience.

The second major difference I found from western archery was aim. I remember doing archery back in high school, years ago. Sighting along the arrow at the bulls-eye and making adjustments for distance, but aiming as straight as possible. To my surprise, when lining up my first arrow under instruction from Mr. Kin, he kept telling me to aim more left until I felt like I was aiming at the target to the left of my actual target. Trusting his advice I released, and sure enough struck the target in front of me with a satisfying thunk. “Kyudo arrows will curve right,” he explained after. There is variation based on the bow, and the power, experience, technique of the archer, but kyudo doesn’t sight true. This was easily the most challenging part of the experience, trying to figure out how and where to aim.

After shooting that first arrow under advice it was explained that the 12 arrow package allows for four practice arrows before “score” is kept on the final eight. So, sink or swim, I had just a few tries to figure out this aiming thing. 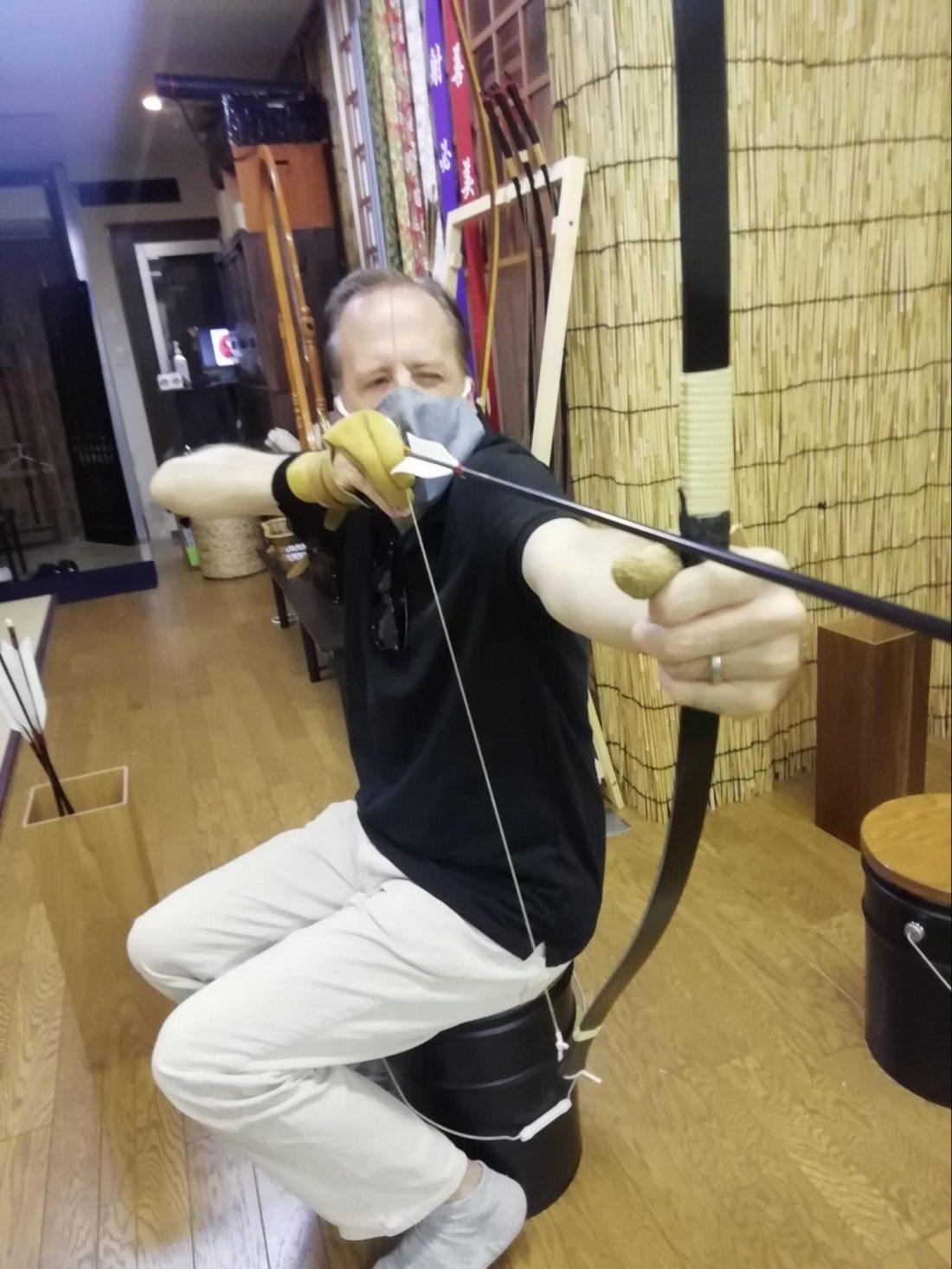 THE RANGE AND THE TARGET

This trial experience is done from the beginner’s seated position. Knees pointed away from the target at a 90-degree angle, so that your shoulder points to the target. At Sharaku the target is six meters (20 feet) away, but I was told that a true kyudo target should be 28 meters (31 yards) away. As a beginner I was sure that six meters was far less intimidating, while still feeling quite the challenge. The sitting experience, as well; viewing a video of myself shooting after I was surprised how difficult it was to hold the bow still while aiming. That difficulty is surely greater when standing, so I was grateful for that bamboo stool.

The target itself is made of wood, and has a diameter of 36 centimeters (14 inches). Though marked in circles as a western target is, I was surprised to learn there is no true “bulls-eye” in kyudo. As Mr. Kin explained, hitting your target is hitting your target. He explained more fully, that the target is just a representation of your opponent’s body. Kyudo still remembers that it is essentially a “killing” activity that is now a sport. The inner circle, or bulls-eye, is the opponent’s heart. The next outer circle is head and abdomen. But the third circle is still a body hit that likely fell your target, and therefore still counts. This explanation further connects the shooter to the feudal history they came to experience and became one of my stronger memories of the things that I was told. 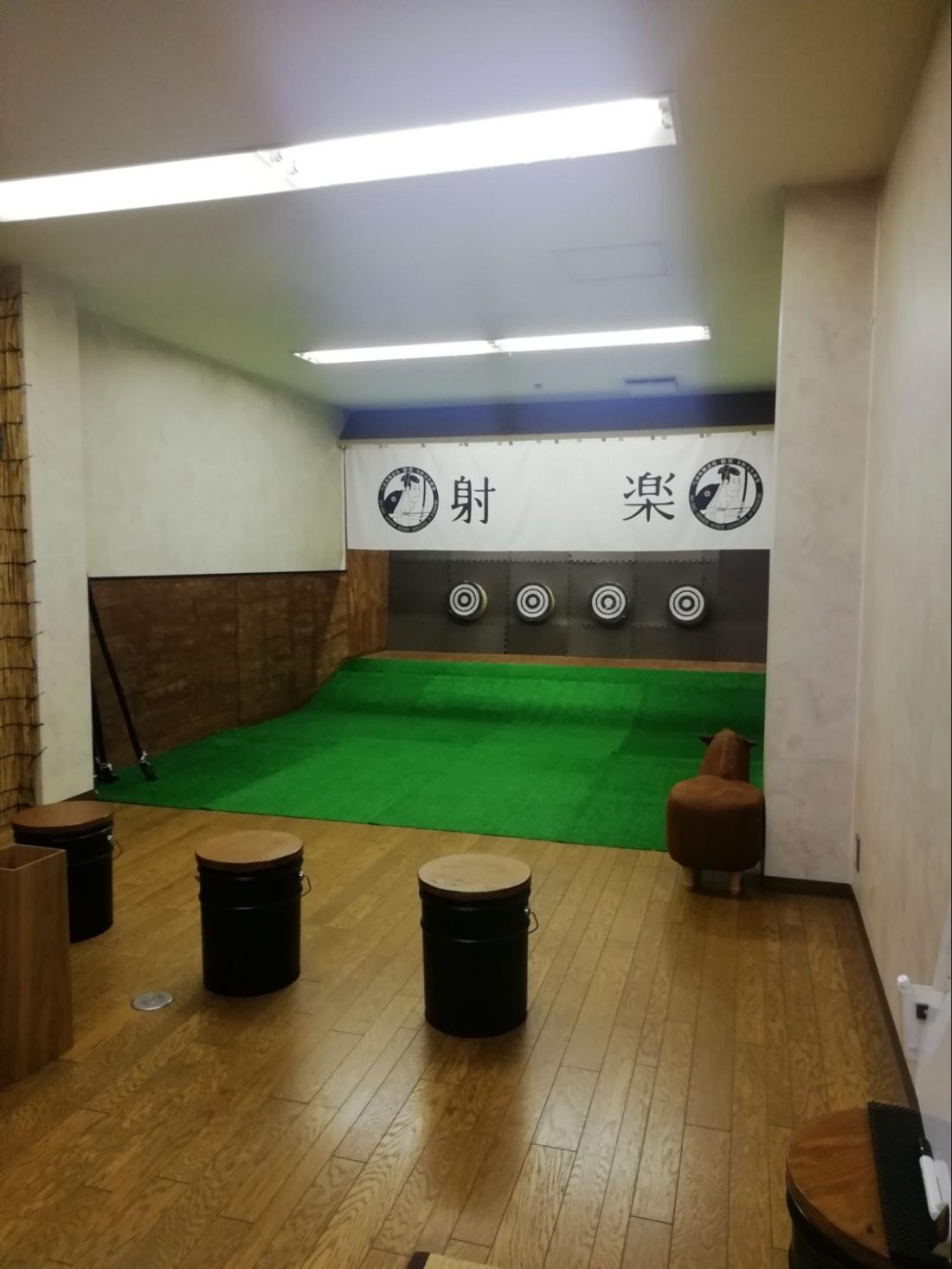 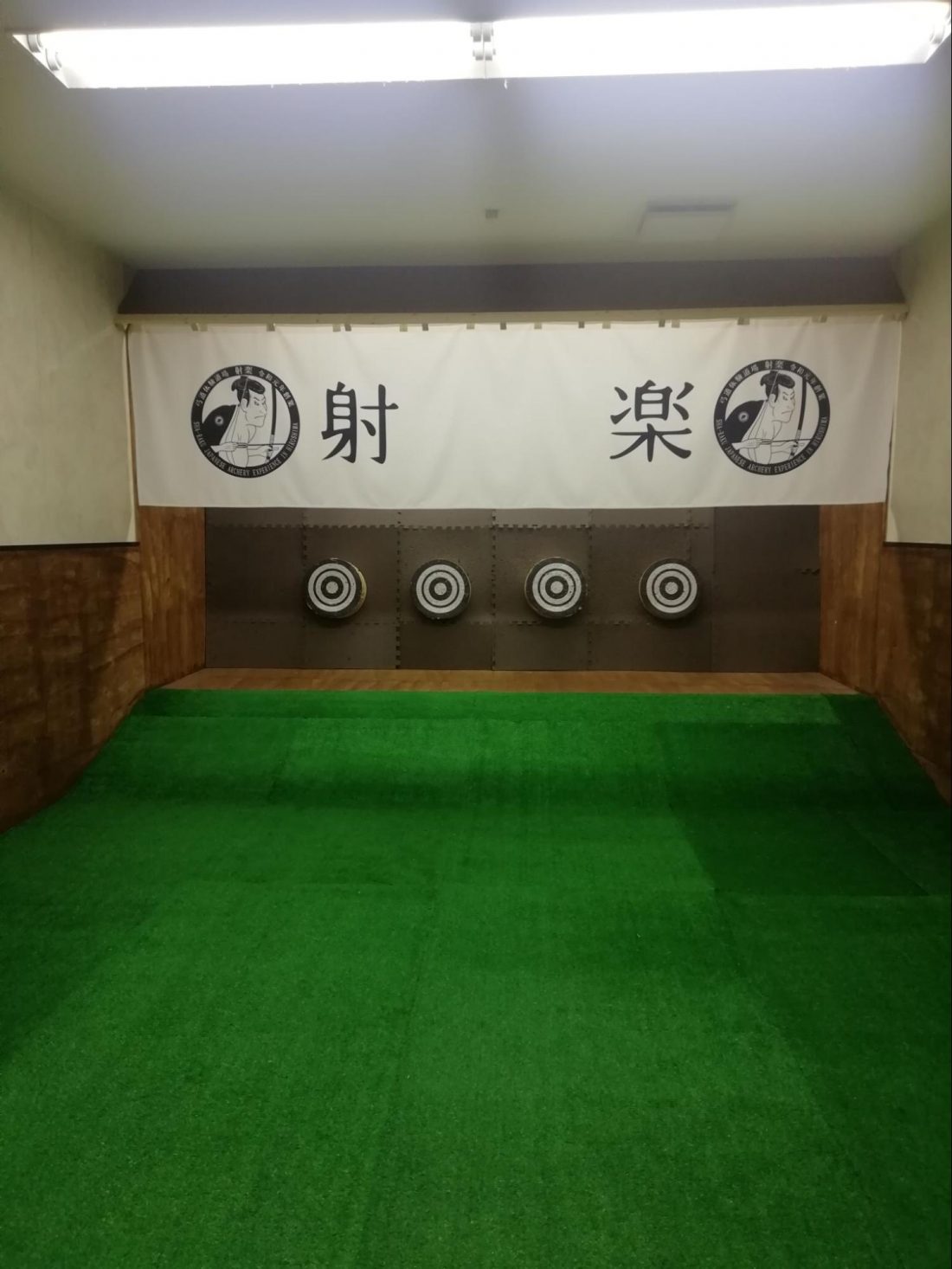 So what was it like to shoot, and how easy or impossible a task was it? In the practice four, I had two hits and two misses, but thought I had figured it out. So when my teacher prepared the white board for my eight shots, I thought I was ready.

First shot… JUST missed low and right. The arrow was practically touching the target, I was so close. Second shot… missed high, but again just barely off. Remembering the body analogy, I guess it would have gone over the shoulder and past an ear. This hadn’t seemed so hard! Third shot… Dead center! And also wide by over a foot! What happened to the expected curve? I had aimed left!

Luckily for me, Mr. Kin didn’t just abandon me and my three straight misses, even though he was now keeping score. Like a good coach, he pointed out that I had turned my body to the left instead of just my shooting bow. It’s necessary for your back to be parallel to the target. I could sense that he was right, and made the adjustment. Fourth shot… THUNK. Okay! I had this!

I then put four more in a row right onto the target. Final shot was probably a lung, being just off to the left of center. Of course, if the body analogy is too much, and you prefer to think of it as a more gentile sport, you can say it was about a seven, if a bulls-eye is ten, western style. Officially, though, I was “hachi-sha, go-chuu” or five hits from eight arrows. I got my official sticker of achievement and also a commemorative sticker of Sharaku, and I was done. The whole experience was a little less than 30 minutes, from entrance to exit. But hours later I was still telling everyone I could find about it. 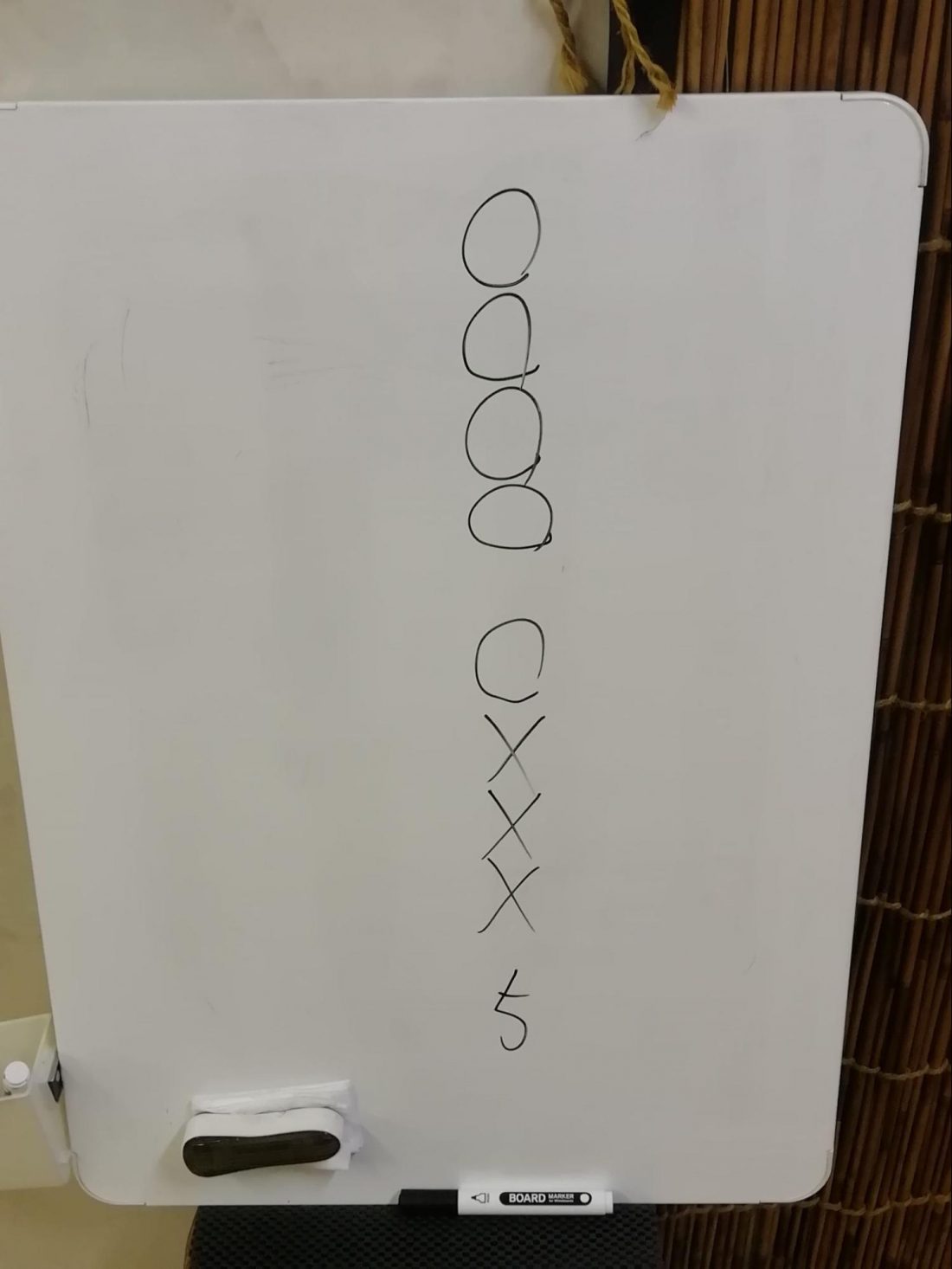 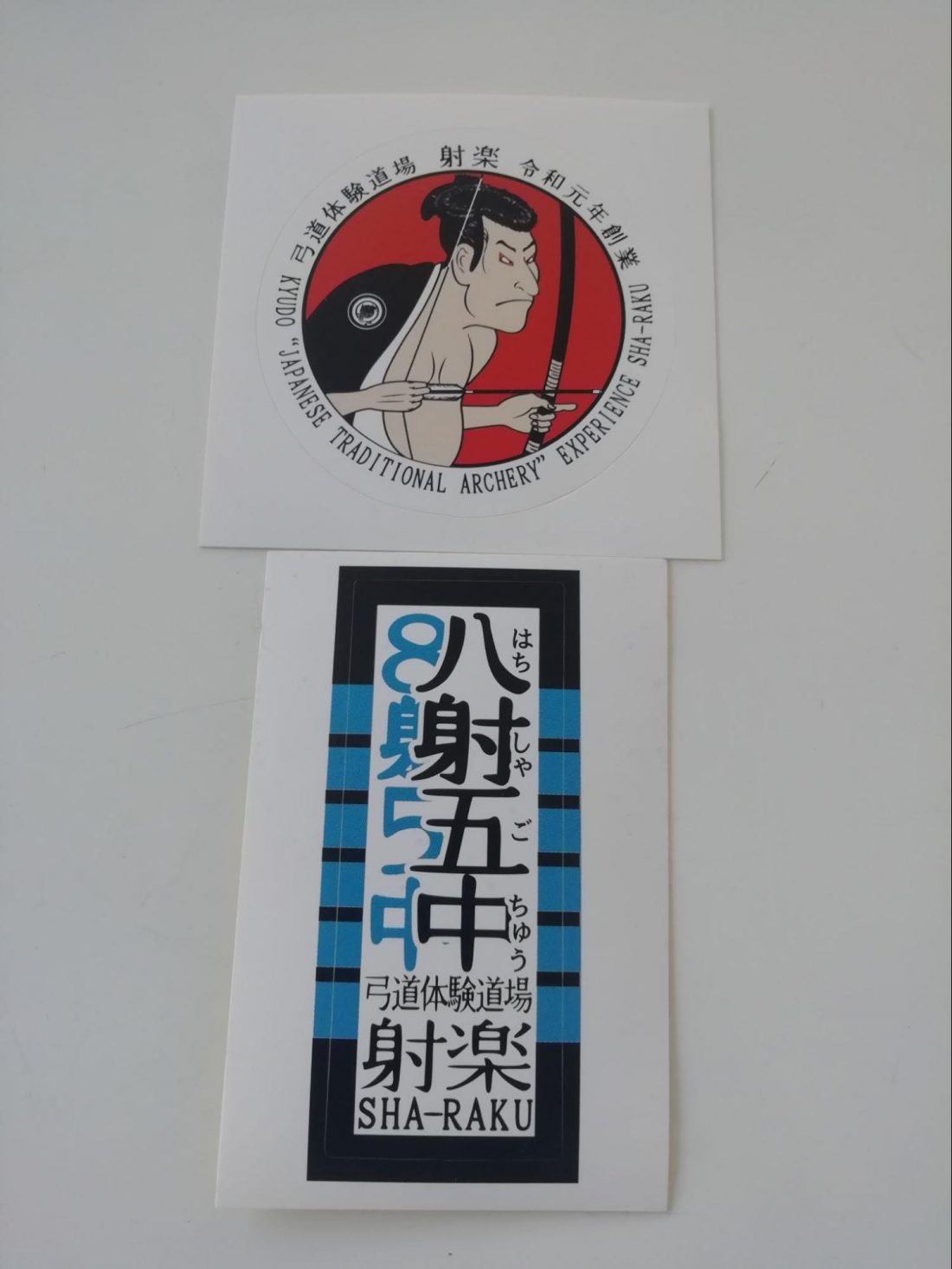 My moment of joy is a bit of a toss-up. Part of me wants to say it was the first thunk on that first practice arrow. Just hearing it hit wood. But since I was coached on the aim for that one, I would say it was the last arrow. Fifth in a row, close-ish to the center. As Mr. Kin said, once you get the hang of it, your confidence builds. That last arrow really made me want to go back and try for seven or eight of eight. 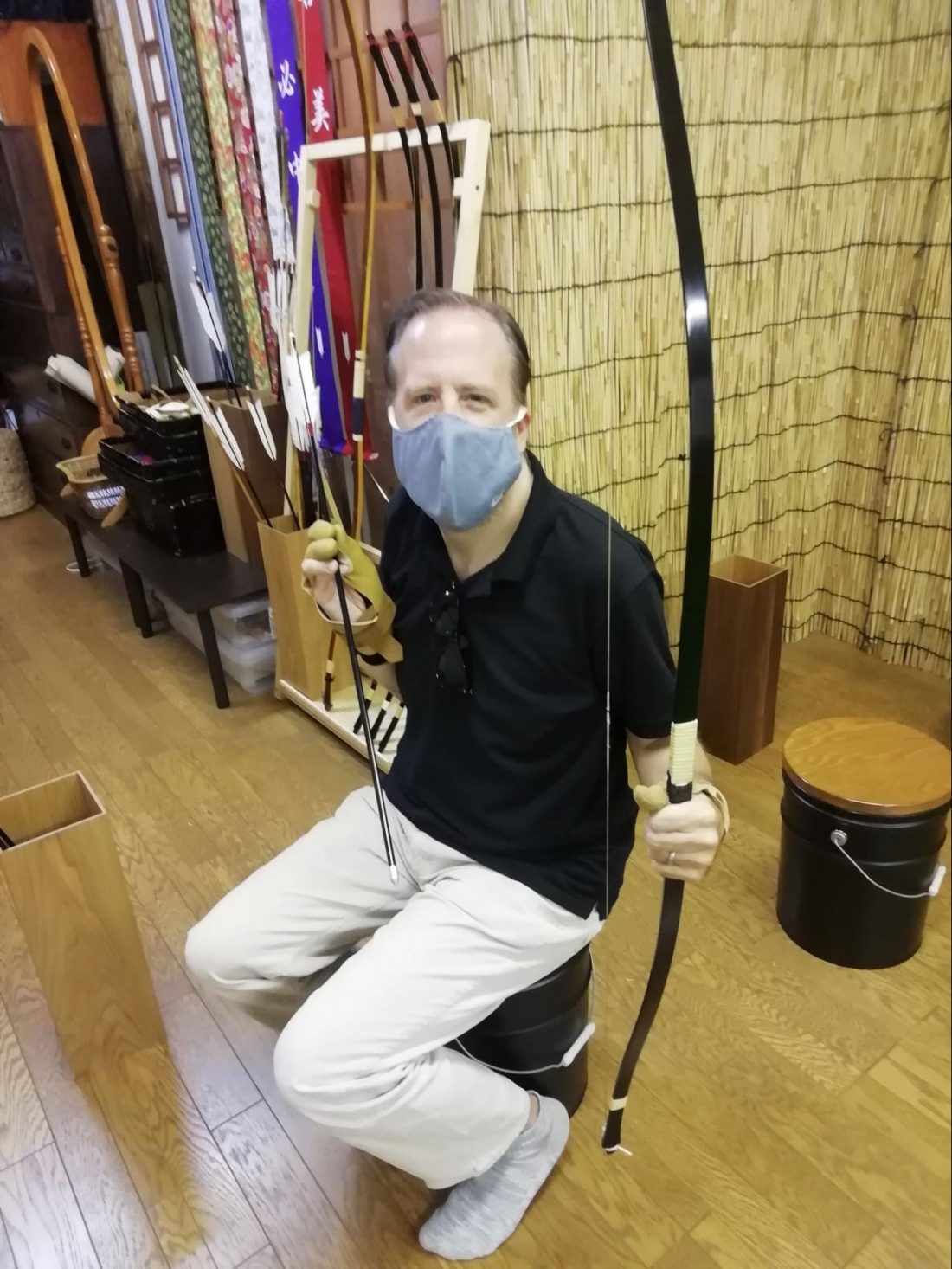 FUN FOR ANYONE AND EVERYONE

Speaking of joy, I really liked what Mr. Kin said about his own place. Let me quote: “Sometimes you go to the Peace Park, and it leaves you feeling a little blue. But then you can come the short walk here and feel your mood uplifted when you hit the target.” Thought of that way, it really is a great package set to your Hiroshima experience.

Available for ages five-and-up for groups of up to eight (four shooters at a time), in the heart of the city, just three minutes from the Peace Park, it really is a great stop to add into your Hiroshima visit. Simple, affordable, possible even for small children, and guaranteed to make a special memory of Japan for you. Just 500 yen more, and you can be outfitted in the official kyudo “hakama”, including armor chest plate, as well. And Mr. Kin is quick to be ready to take photos, even taking a video clip of me shooting of his own initiative. So your memories can be well supplemented with incredible and unique photos, too.

In the last two years, around 1,500 people have come into Sharaku to give it a try, about half of which have been foreign visitors. 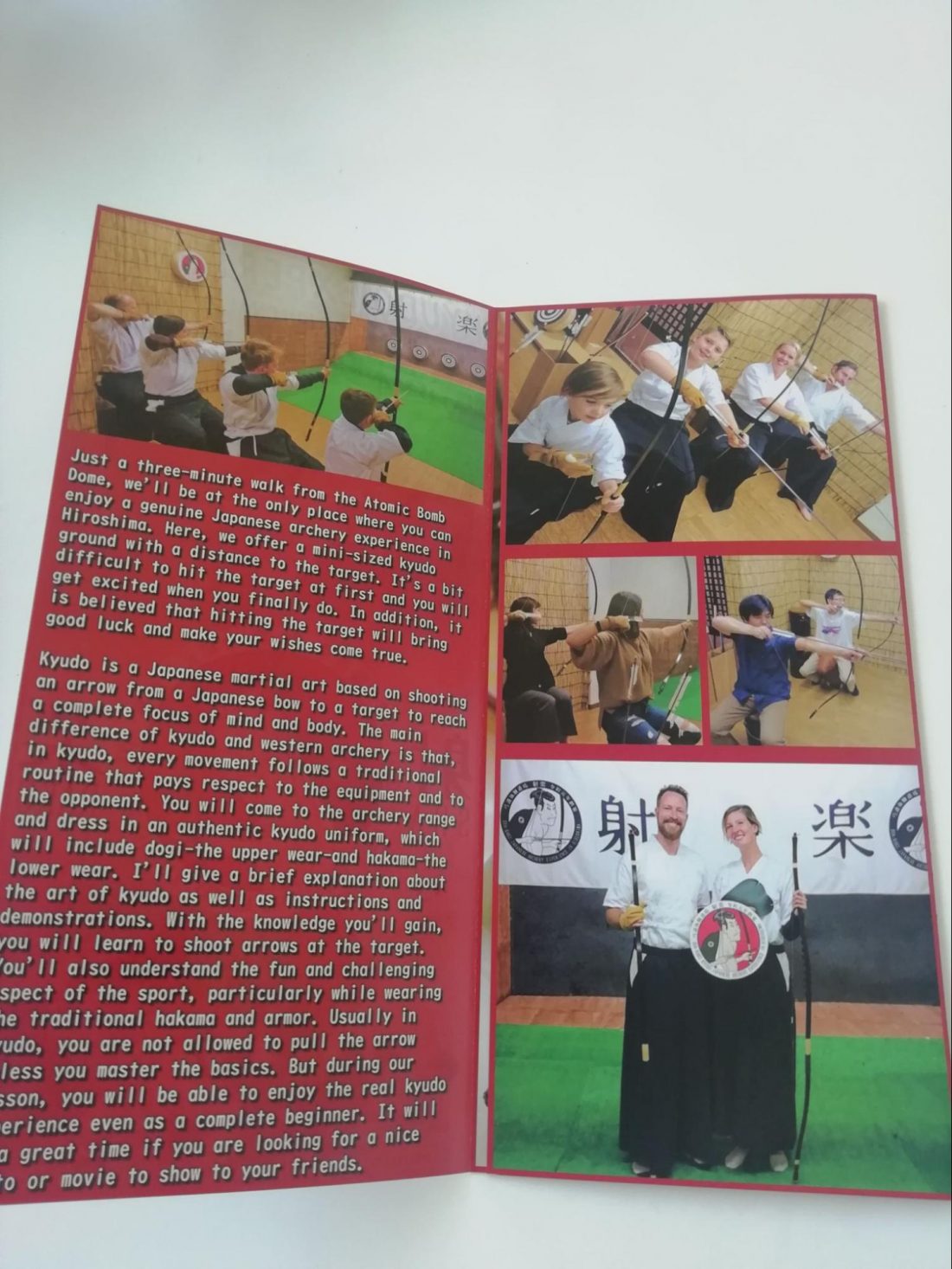