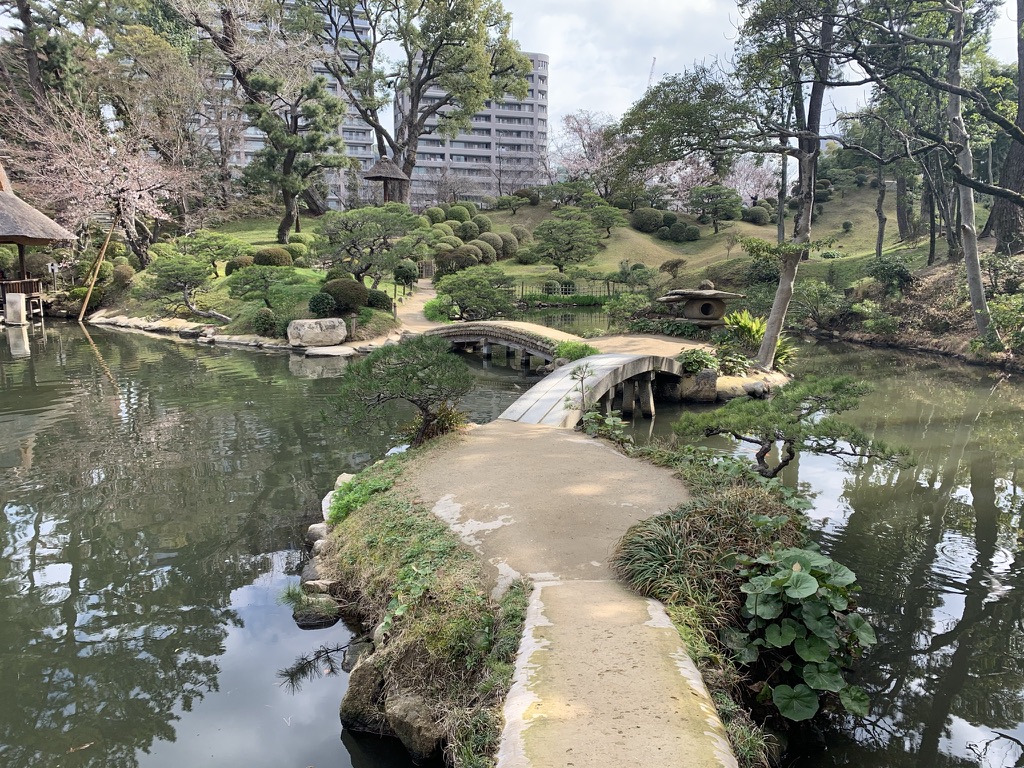 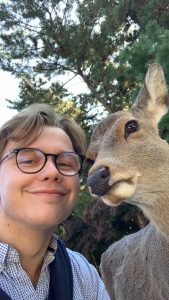 taking a break from the city

Walking through the streets of any major Japanese city, be it Tokyo, Kyoto, or any other, I sometimes feel overwhelmed by the blinding luminescence of street lights, the astoundingly enormous buildings of the city, and the crowd, and the cars, and the smell, the noise, the never-ending sea of concrete. And suddenly, squeezed between a bank and a 20-stories company building, I oftentimes stumble upon a small but o-so-well preserved shinto shrine. It compels me to look at it, it is so magnificent yet so out of place; it feels as if I just found a secret place that no one was supposed to know about. A place that hid from the turbulences of the city to preserve its own peace, a veritable embodiment of the old proverb: to live happy, live hidden. Would I dare step in? I personally could never resist the temptation. One step, two steps, now I’ve passed under the tall red door, and suddenly, the noises stop. The lights fade. Time stops, and leaves me aghast as I realize I have stepped in a place of absolute peace. This is not an uncommon experience when living in Japan. Having been in this country for a few years, I have come to realize that it has an undeniable talent for preserving small places of nature or of religious value in the midst of a city, which provides one for many opportunities to take a break, travel back to a time where the days were longer and the air fresher. And if you are looking for such a place in Hiroshima, Shukkei-en (縮景園) might just be perfect for your needs of calm and beauty.

Shukkei-en was built almost exactly four hundred years ago, in 1620 A.D.. It was ordered by the local lord, or Daimyo, Asano Nagaakira. Some still informally call it « Asano Park », to denote the essential role of the Asano family in its history. The garden served as a villa for the Asano family, until it was given to the Prefecture of Hiroshima in 1940. Being extremely close to the atomic bomb’s landing spot, it suffered much damage during the war, and was renovated afterwards. Shukkei-en is thus a reminiscence of the Edo-period Japan, a testimony to the lifestyle of ancient Japanese lords.

Upon arrival, the atmosphere changes

As I entered shukkei-en, the most striking thing was the colour scheme. It has a really distinctive predominant colour that creates a strong sense of separation from the rest of the world. It feels as if everything was grayish and suddenly the universe turned green. On top of that, shukkei-en puts on a different coat depending on the season. 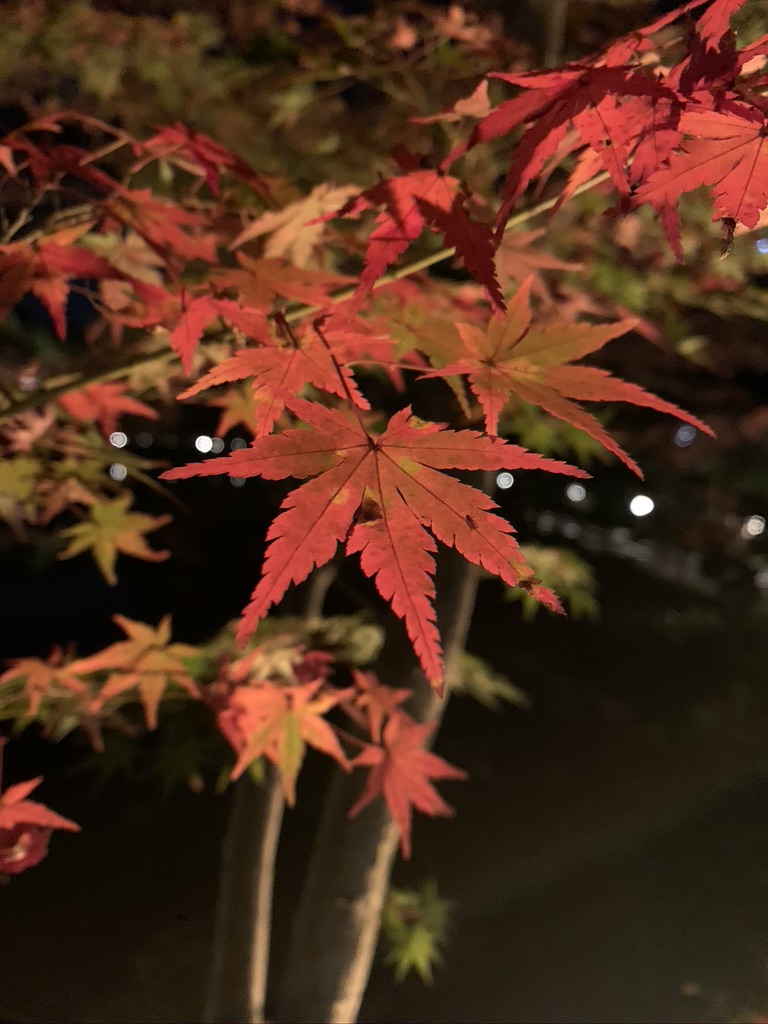 went a few times, mostly around may, but it is worth it to go during different seasons. Shukkei-en takes out its red dress around  November, when the autumn leaves (紅葉, kôyô) start to grow. If you’re quick (I luckily was), you might be able to catch a glimpse of the cherry blossoms (桜, Sakura) at the turn of April; going to shukkei-en during this period is sort of a huge event in Hiroshima, and you will probably encounter a lot of people standing under the trees, trying to catch the  perfect picture. 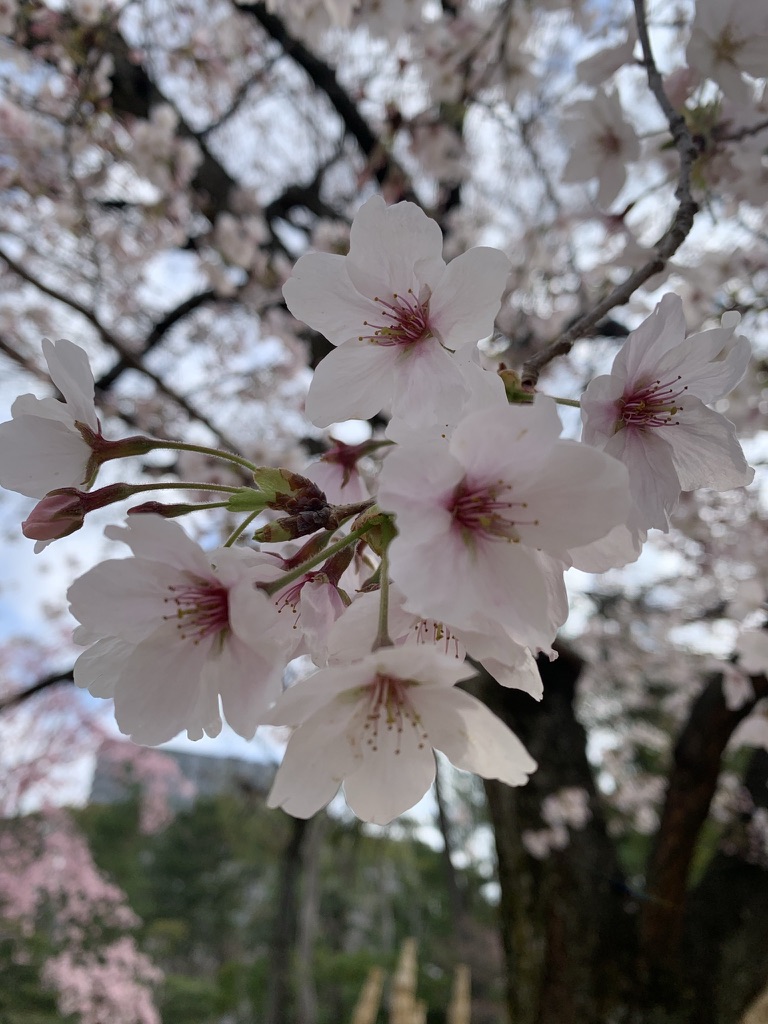 And as  soon as the winter fades, when trees recover from the cold and regain their original colours, the magnificent green,  characteristic of spring, shows up again. 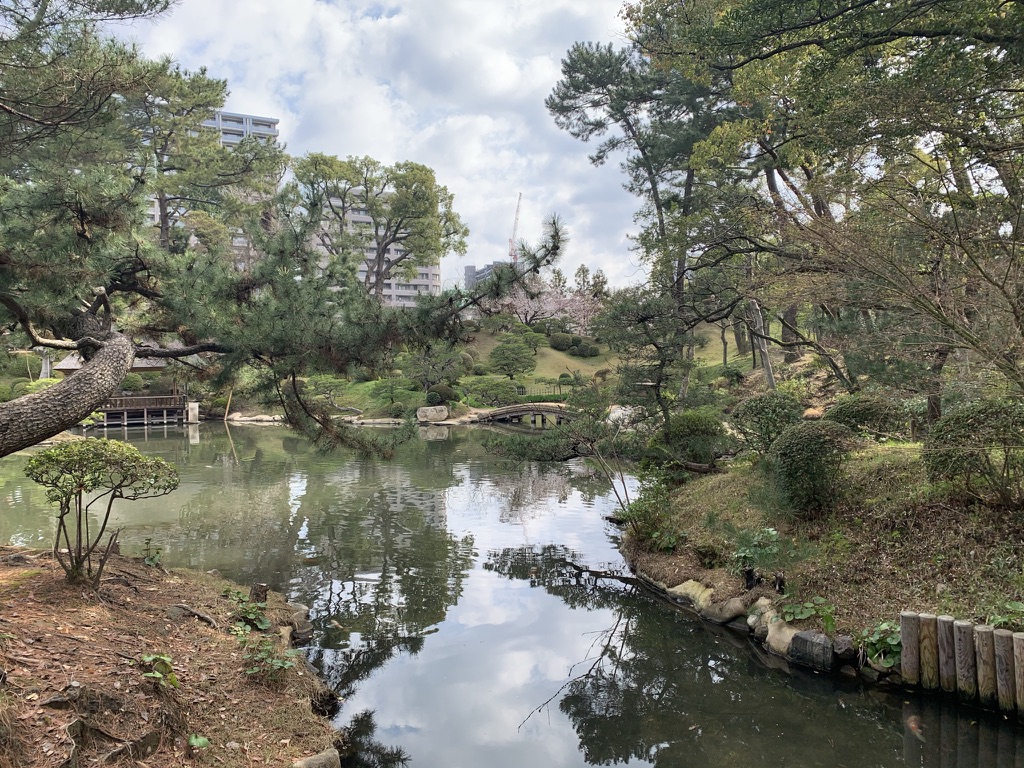 As I took in the scenery, I really just forgot that I was still in the middle of Hiroshima, surrounded by tall buildings: when I look at some pictures I took, it does look like I could have been just walking in a forest somewhere in the countryside, except when suddenly a building pops up in the background. 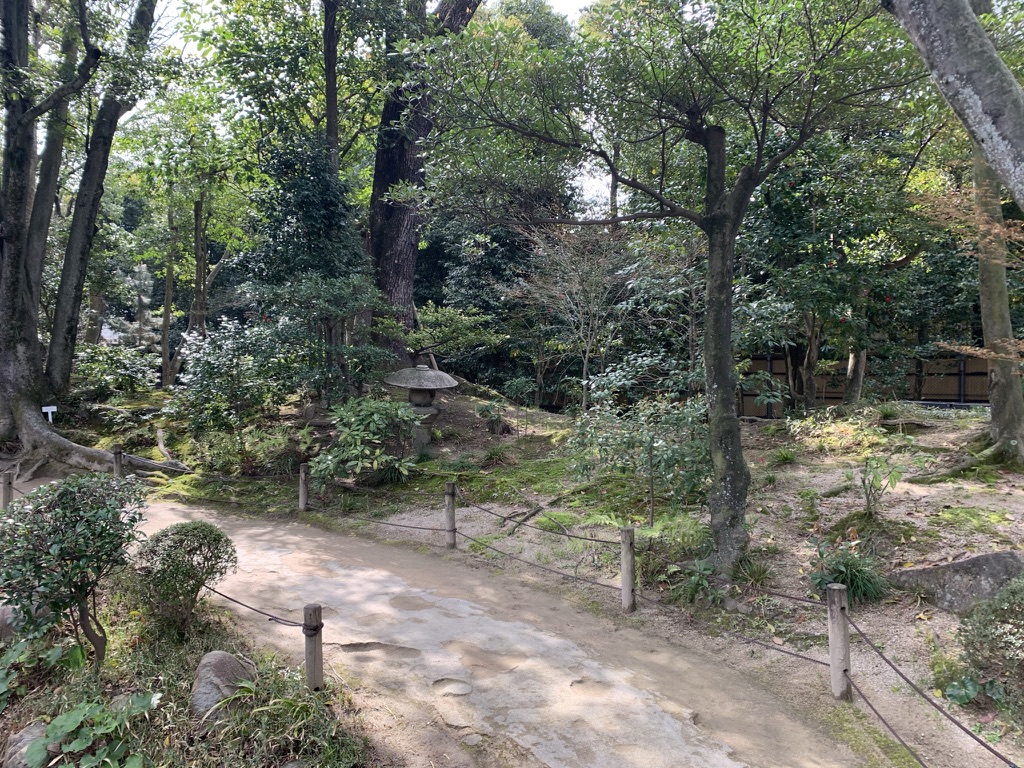 The path is sprinkled with remains from another time, which reminded me of the former ways. Here, a tôrô, a sort of lantern that first originated in China and came to Japan around the time  the country was introduced to buddhism. 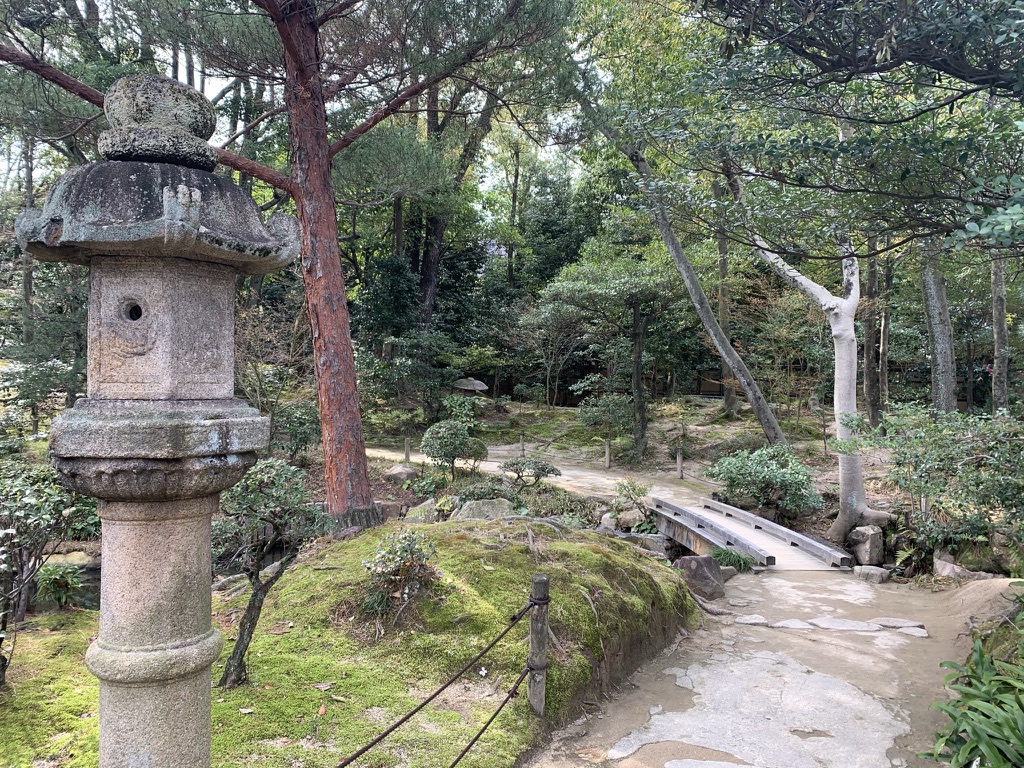 There, a small shinto shrine dedicated to a local divinity, both testimonies to  the complex religious landscape of Japan. As I progressed, I started noticing water, and once I crossed the first bridge, the view revealed itself: the garden is centered around a pond, on which a myriad of small, artificial islands were built, a few bridges allowing one to cross from one side to the other.

The bridge goes left, right, left, right, and when I stopped midway, I was able to see the rainbow bridge (跨虹橋 kokôkyô), an arched structure that would later allow me to cross back to the exit. 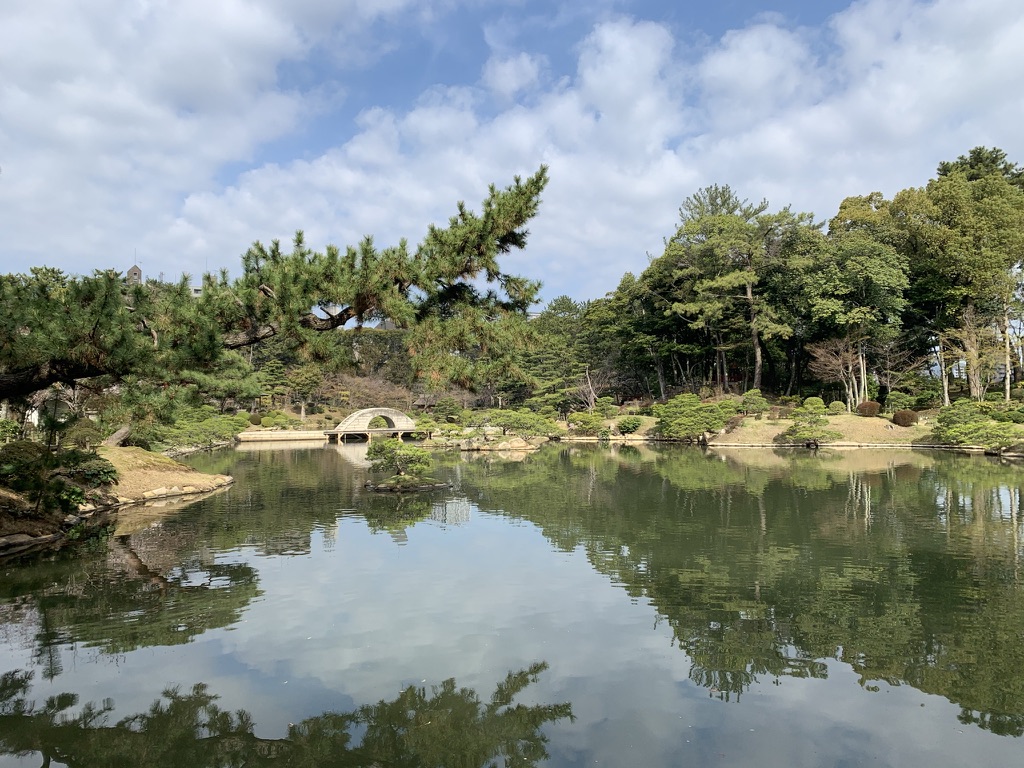 Am I still in Hiroshima?

Let’s be honest, Hiroshima is not as crowded or active as Tokyo, but it still is a big town and can get quite animated, especially at night. It thus feels really special to be able to find a place that is right in the middle of Hiroshima (literally in the central district, naka-ku, 中区) that is so well-preserved and « protected » from the outside world. I thus stepped inside a small forest of bamboo, and  suddenly realized that the other side of the river was sprinkled with shops and quite tall residential buildings. 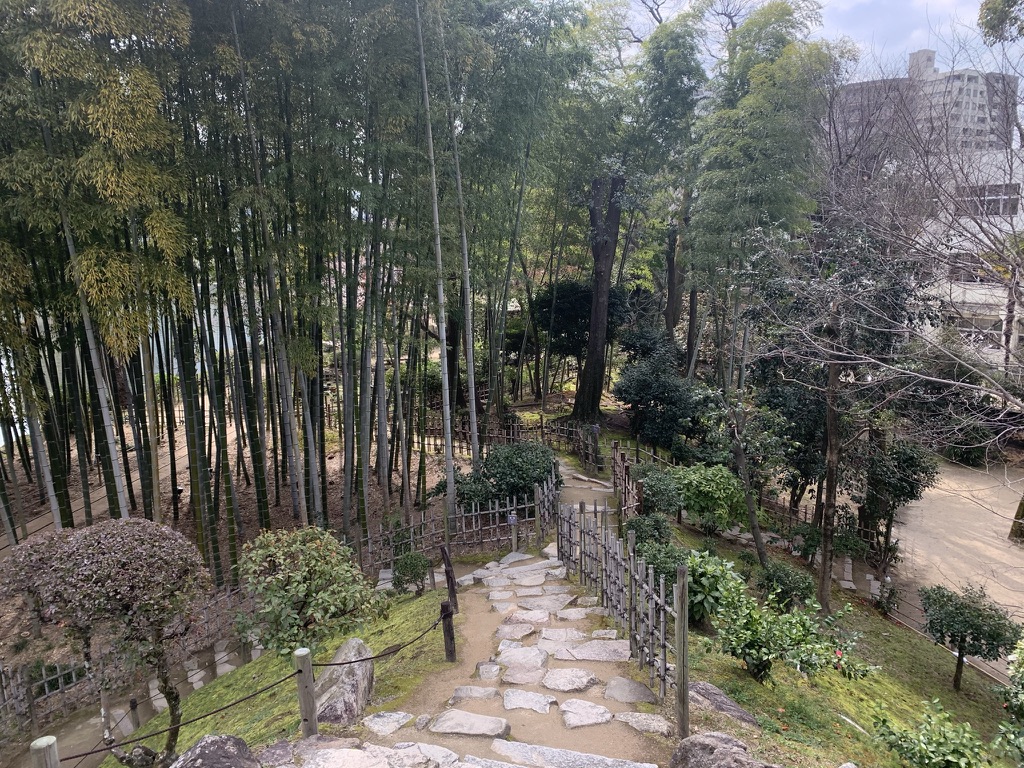 What I found particularly interesting and distinctive was a small garden that grew medicinal plants. This small area was originally an order from the lord who lived there, at a time where medicine was hard to acquire and diseases could get pretty bad, rather quickly. To be able to achieve some sort of autonomy, the Asano family grew their own medicinal plants and thus were able to craft  their own medicine in times of need. 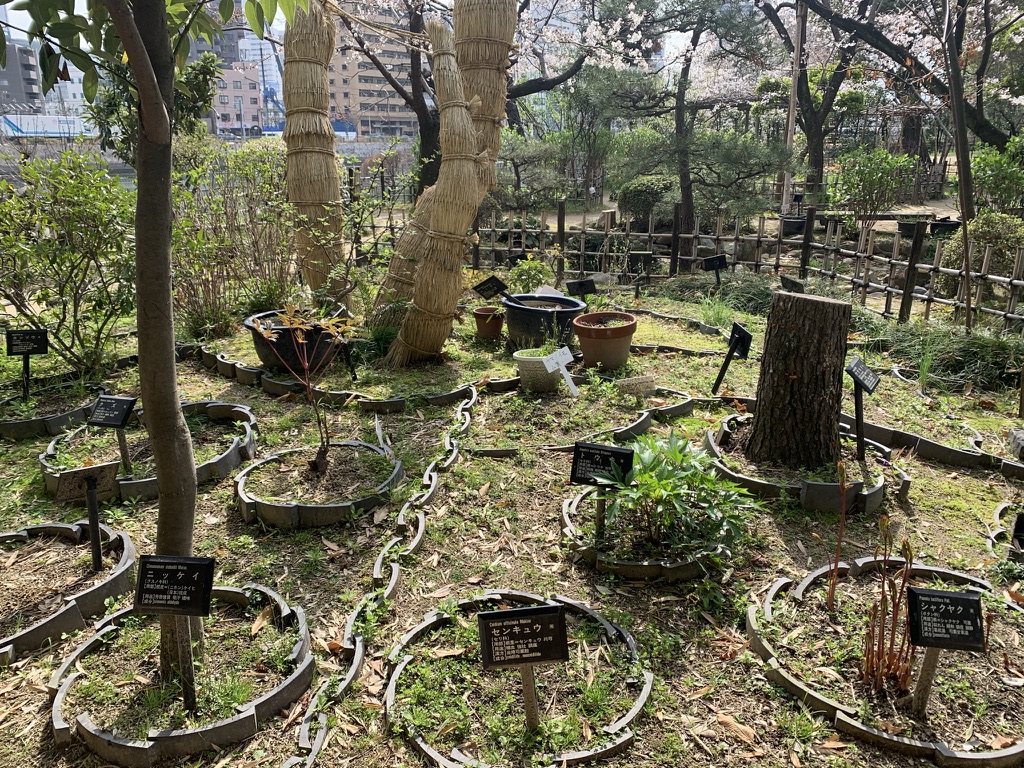 This is one of the many details that really gave me a sense that I had traveled back in time, and that I was exploring some old relic. For instance, the small islands that I briefly talked about earlier, actually have a bit of history to them: they are not random piles of grass and rocks,  but are actually terraformed to look like cranes and turtles. Those two animals are symbols of longevity, and the presence of turtle-shaped islands was a way to acquire the favour of the gods in the hope that they would grand the owner a long life. 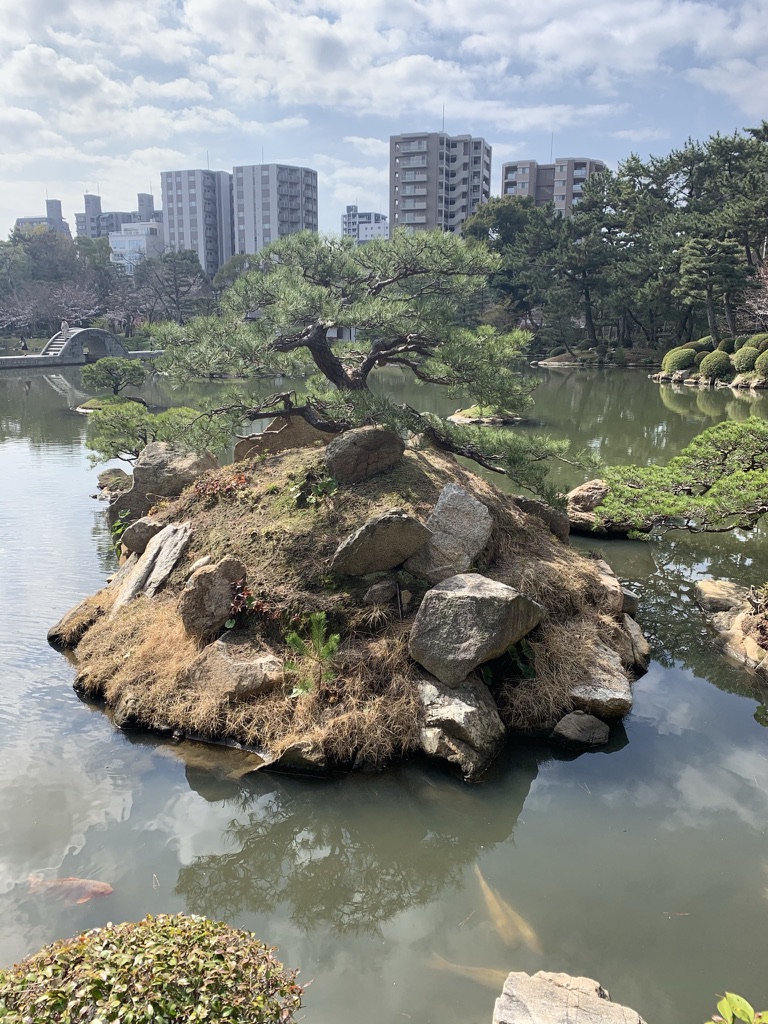 The garden even features the old house in which the Asano clan periodically lived, which really had me wonder whether this was a mere garden or an actual open-air museum. 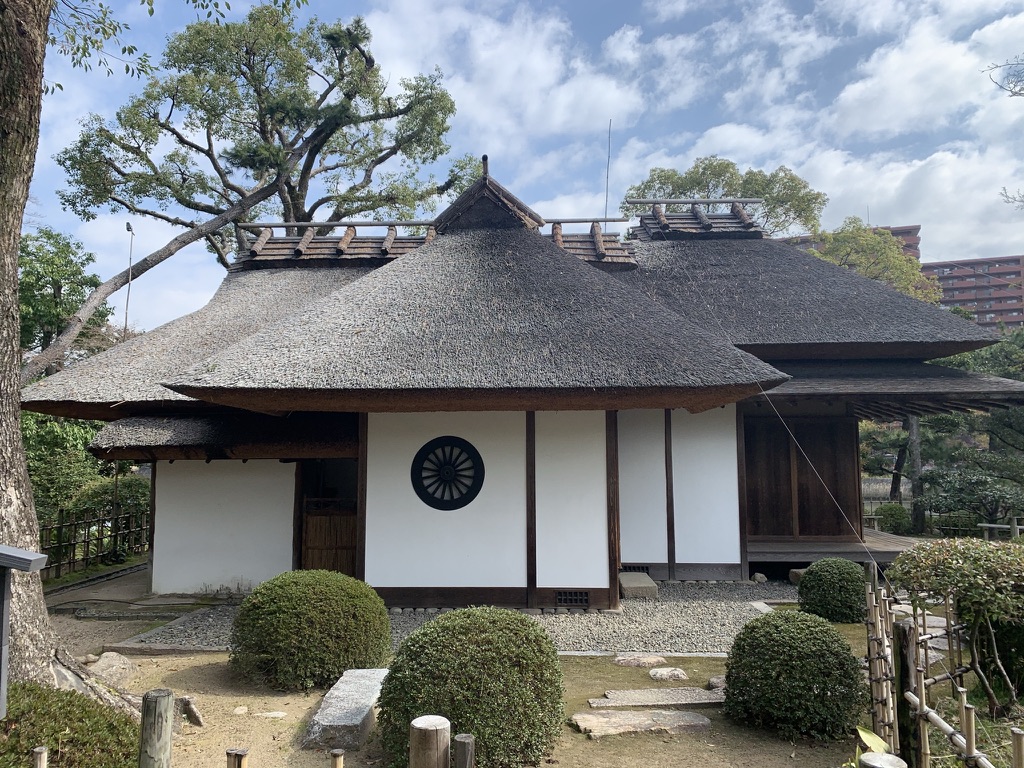 I actually learned a lot about the different hotspots of shukkei-en by reading the numerous explicative signs, I strongly encourage every visitor to take some time reading them. Especially the sign dedicated to the story of shukkei-en during the war, was extremely harrowing: after the bombing, numerous survivors tried to take refuge in shukkei-en, but died before receiving medical care. Their remains lie under the garden even today, and a memorial monument was consequently built in their memory. I believe it is essential to at least take a minute to stop at it.

Moment of joy: absolute peace, and the beauty of contrast

Although the garden is overall beautiful, one specific view really struck me and had me stop for a few minutes and contemplate. As I was wandering through shukkei-en, I found a small construction resembling a veranda, with a hip-and-gable roof, four pillars and floor tiles, on which I was not allowed to set foot with my shoes on. I thus took of my  shoes and took in the view; it is simply striking, for two reasons. First of all, it might be the most comprehensive view in all of shukkei-en, as it allows one to take in most of the garden’s features and really gave me a good overview of everything I had seen so far. 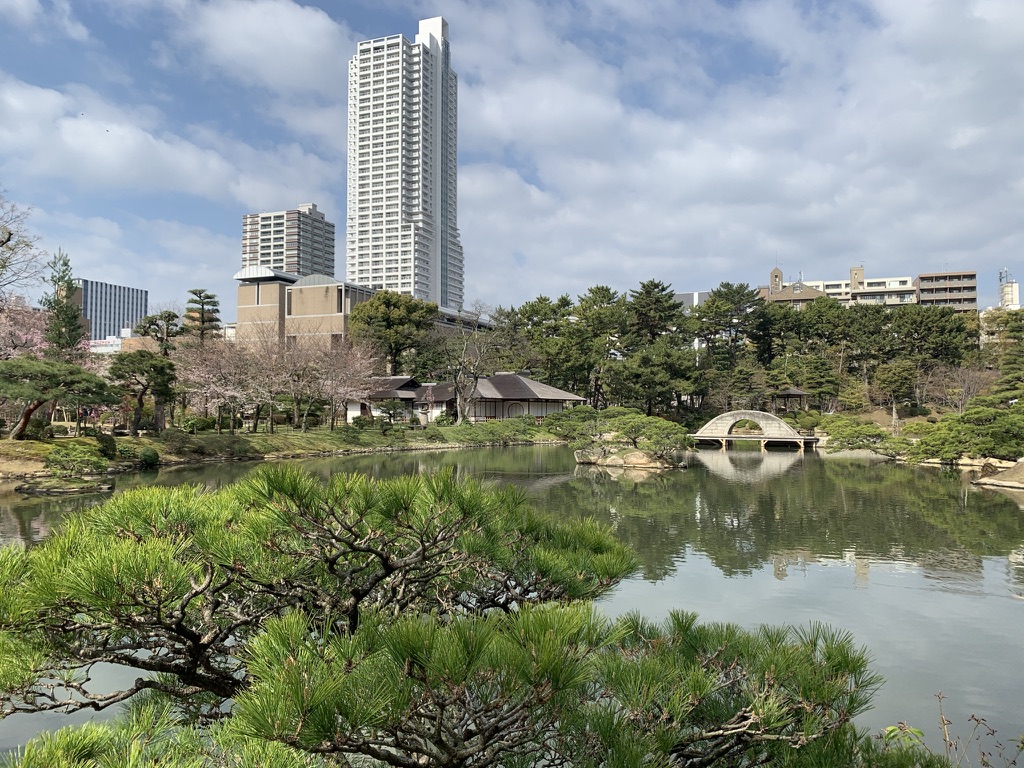 But on a personnel level, what especially surprised me was the contrast it offered. Standing there, I could see the old house in which the Asano lived, and in the background I could see the new buildings in which Hiroshima citizens live. I could see the old bridge made of stone, and the new buildings made of a probably similar stone. The pond reflected all of that, and created on a same plane a sort of mixed image that draws a powerful contrast between the old and the new, the inside and the outside. That contrast was particularly strong because the name of this small structure can be translated to « transcendental habitat » (超然居, chozenkyo). This probably was not the original intention, but it did make me feel as if shukkei-en was transcending time and space, offering me an experience of the old, in the midst of the new.

Shukkei-en is actually next to the Hiroshima prefectural Art Museum, which I highly recommend as well. The easiest way to go there is to take the tram: you can ride the sixth line until the Ebisuchô station (胡町駅), or ride the bus number 3 until hatchôbori (八丁堀駅) and walk a few minutes from there.