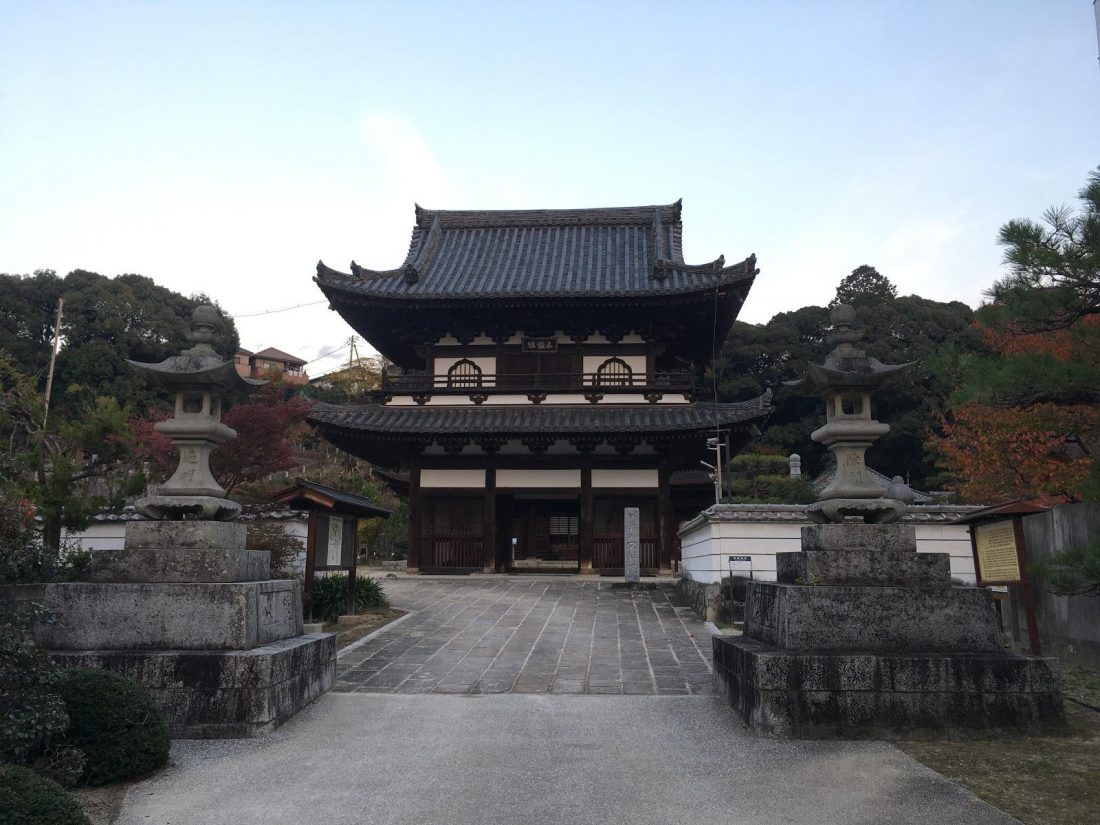 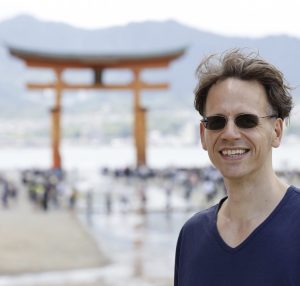 Visiting Fudoin is like a breath of fresh air, still, serene and peaceful. As one of Hiroshima’s most historical sites, the temple holds a respectable profile with locals and tourists alike. There’s not much to see and do there which is what makes it so great. Offering a sensory reset from hyper stimulating city life in Hiroshima city and Japan in general. The entrance fee is a very reasonable 0yen, but you can make a donation inside. This understated treasure could be a quintessential temple or utterly dull depending on your outlook. Besides, it’s less than 10 minutes walk from my place!

So, is it worth a visit? Let’s find out.

From Fudoin-Mae Station it’s a 2 minutes walk to the temple.
Buses are available from Hiroshima bus centre & Hiroshima station.
The nearest JR station is Shin-Hakushima, it’s a nice 30mins walk along the Ota river bank.
There is free car parking inside the temple grounds. 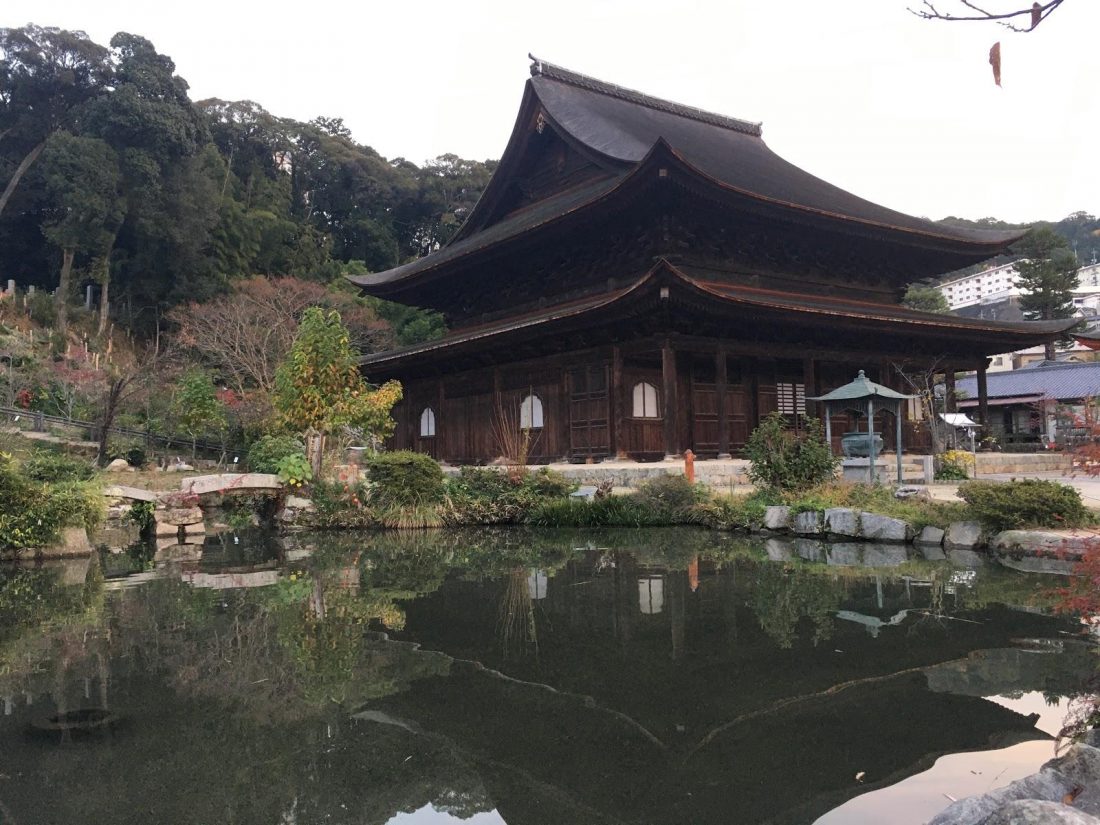 The entrance gate sets the scene for stature. Some information boards offer the chance to test your image reading translation app or Japanese skills. The notable history is unfortunately not displayed for non Japanese readers. There are a pair of intimidating gargoyles guarding either side of the entrance, who look like forces to be reckoned with.

The air of simplicity at the site feels great and the space can be enjoyed for its unassuming qualities. Everything feels in proportion with adequate space to balance the with structures on the site.

To the left a small pond offers the qualities of a nice Japanese garden without any formality or pretention.

The main temple building is characterised by an austere, imposing dominance. It is a remarkable piece of wooden architecture, with the roof constructed with the skill of miyadaiku (skilled carpenters), whose work is prized by the ingenuity of interlocking joints without the use of nails. Despite its age, the building looks well maintained and impressive. 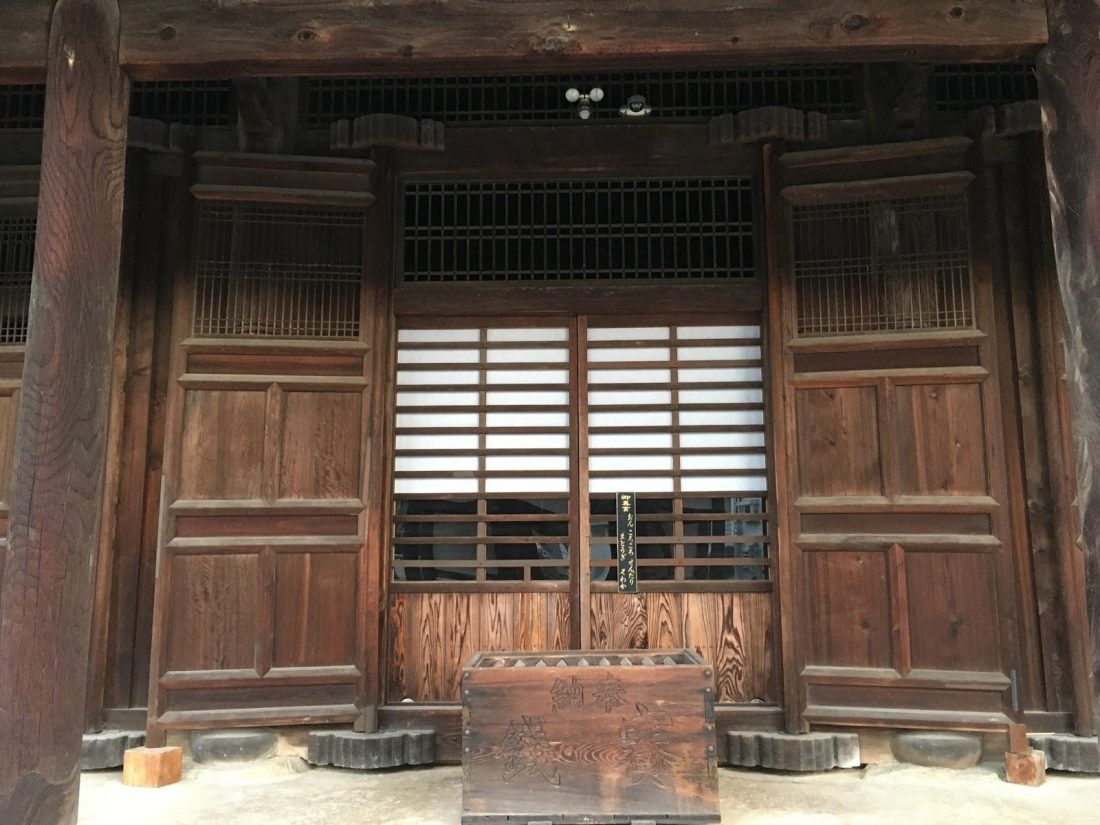 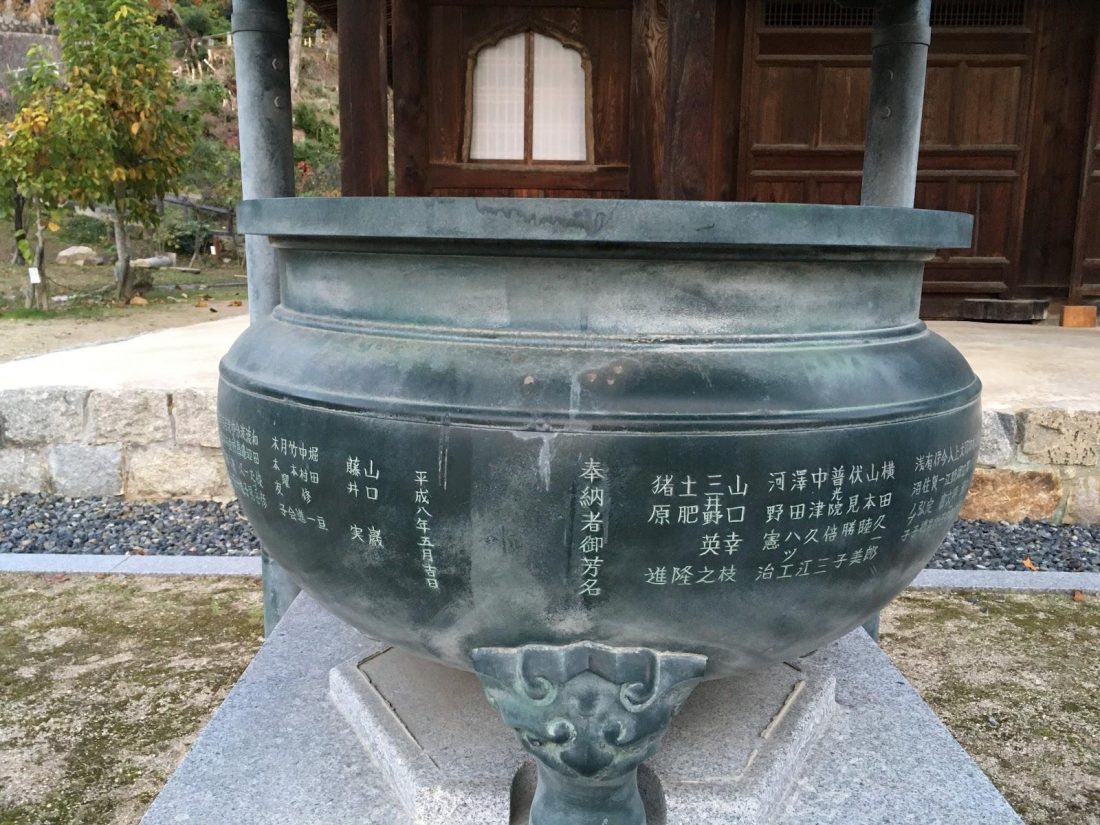 There are small windows at the entrance of the temple, where it is possible to gleam a peek at Lord Buddha in statue. Sometimes even these windows are drawn and it is not possible to see inside at all. Inside a statue of seated lord buddha looks well positioned amongst the usual devotional paraphernalia. The building is rarely opened, only for periodic cleaning.

The giant incense burner itself is a good enough reason to burn some incense, which you can purchase at the temple.

For actual praying there is a smaller temple, set back to the right which offers all the usual uses. Access to a visible buddha, candles, incense, fortune telling and my favourite thing..

At the rear temple there are some giant wooden dharma beads that you can roll around and clunk to your heart’s content. 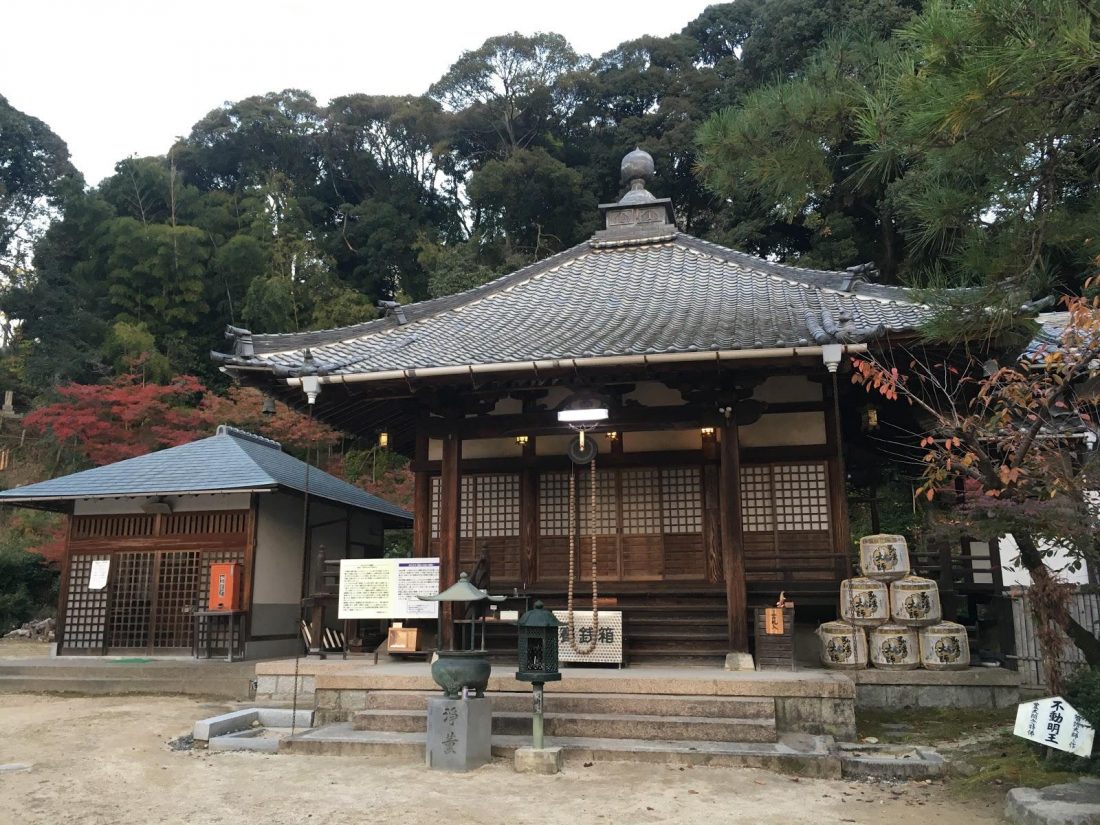 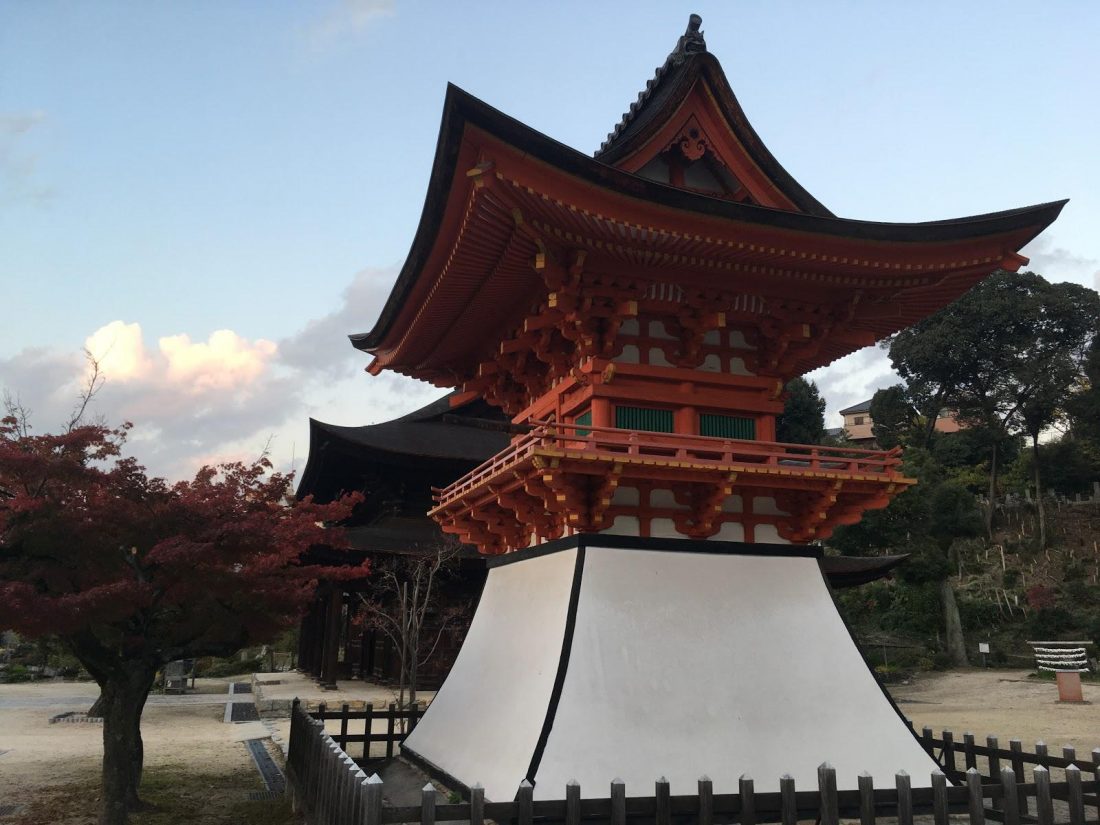 Another great feature in the courtyard is a giant Japanese style stupa, painted with a vibrant red paint. Usually this type of structure holds some sacred relics, but unsure what this one contains. Doesn’t stop it looking cool and being fascinating.
The ground has a large gravel open space and a small collection of kid’s bikes, which you can use freely. There is enough space for kids to have a ride or run around. The temple grounds are walled, so is an ideal environment to let your small children have a safe play around. 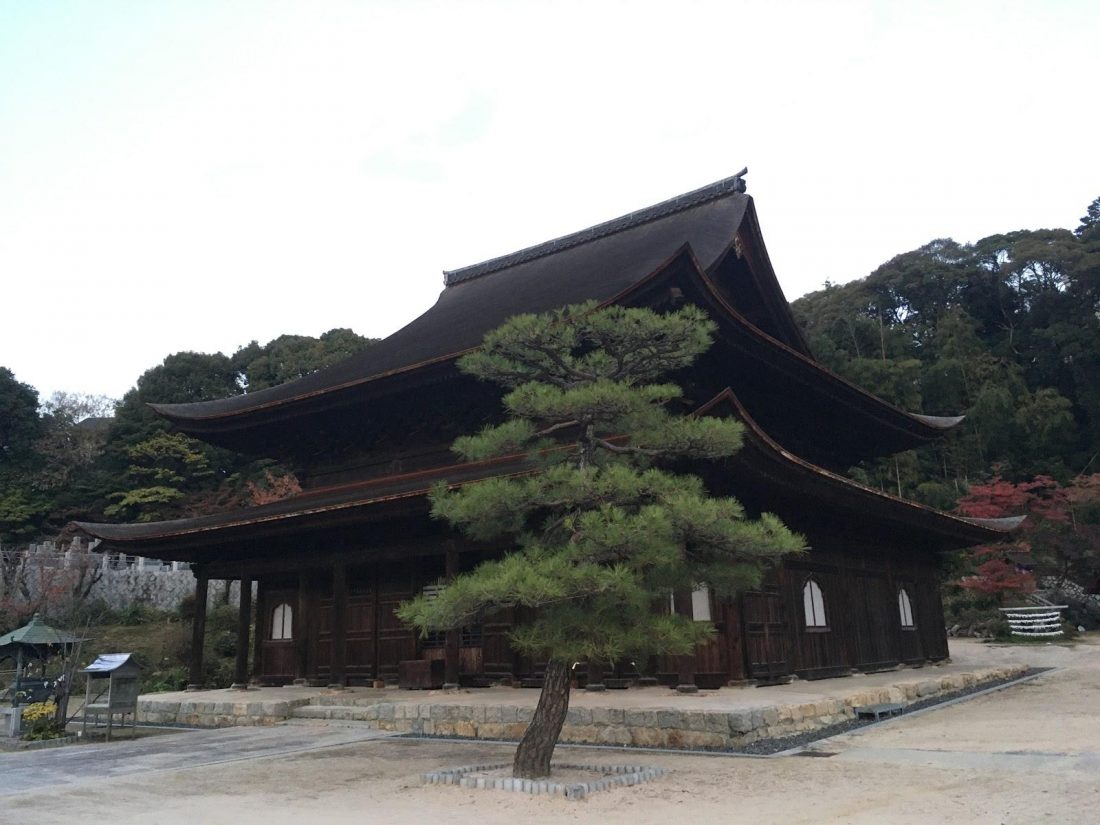 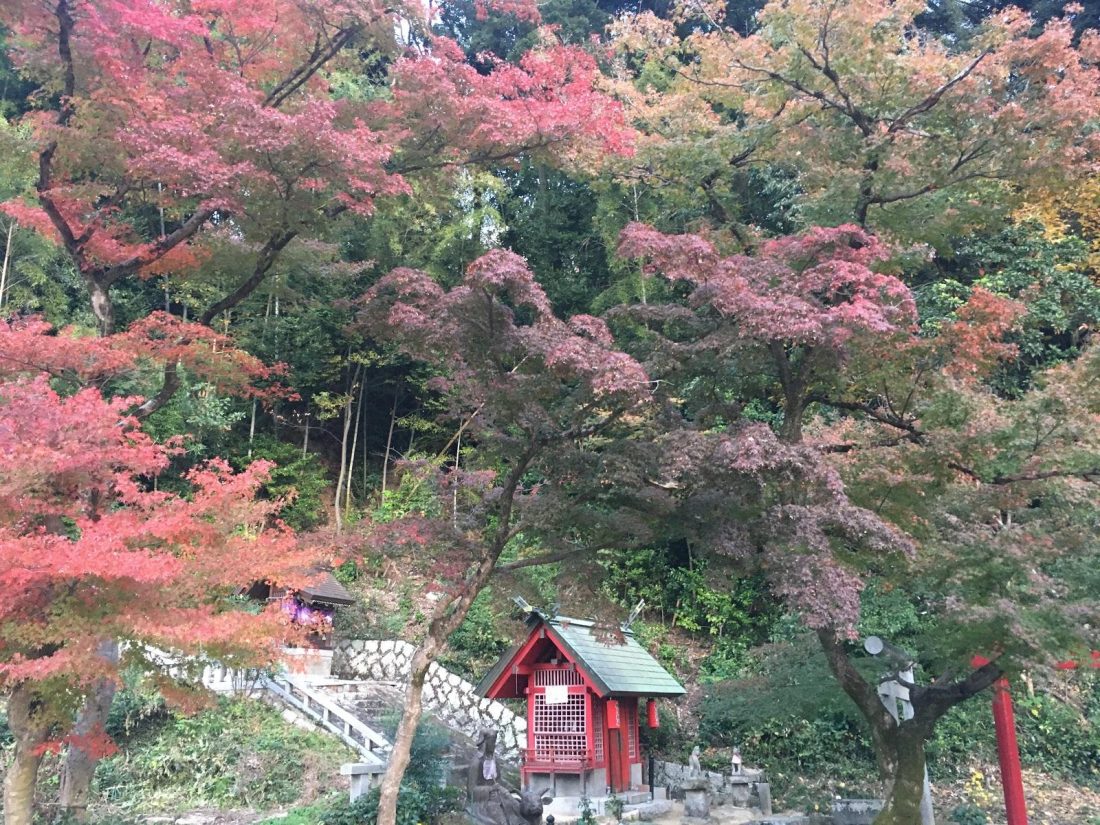 The backdrop of mountainside nature provides a variety of trees that accentuate the seasonal colours. I visited in late autumn at the end of November and could enjoy the beautiful momiji maple trees. The few trees that are featured near the temple are exquisitely shaped and pruned.

For those visitors who want to hedge their bets with the divine, there is a tiny shinto shrine with a row of colourful torii gates behind the smaller buddhist temple.

Up the hillside behind the temple is a graveyard including the remains of some of Hiroshima’s most prominent elite. 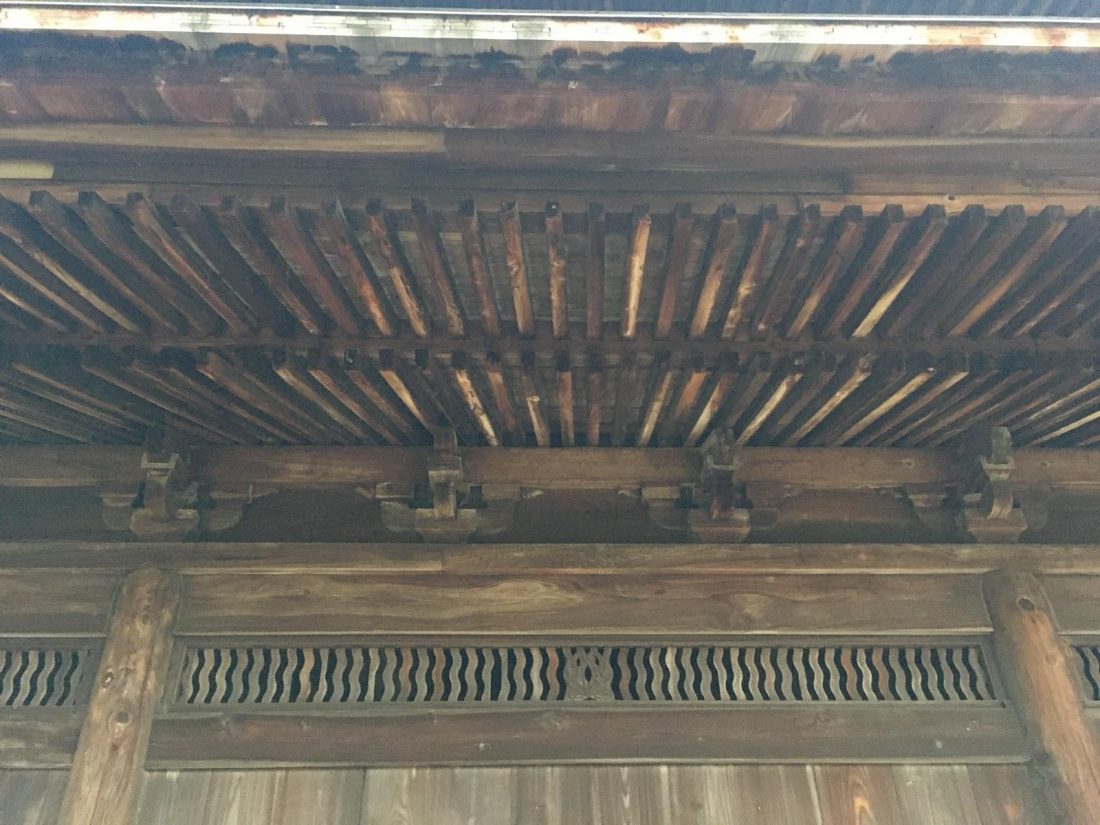 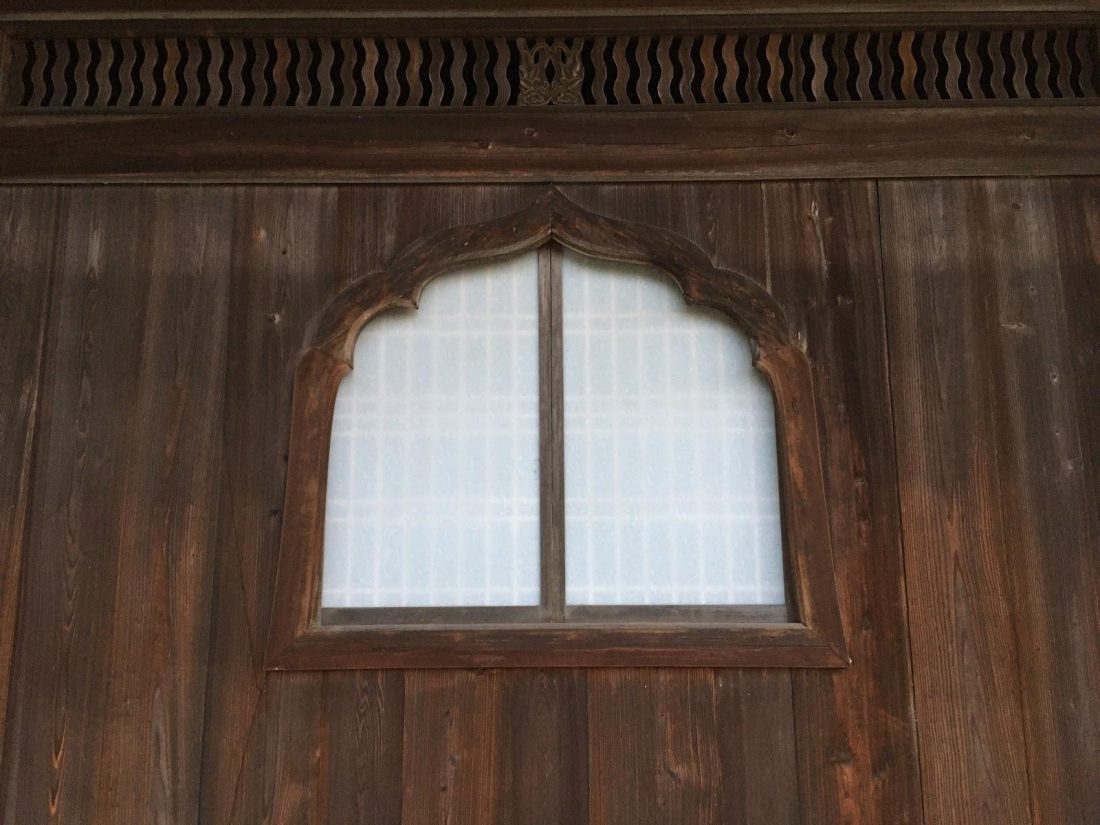 According to one theory, the Ashikaga shogunate established temples across the country during their reign in the Muromachi period (1338-1573). The main temple building was completed in 1540, with other structures on the sacred site being constructed either side of this date over the period of decades. The numerous cultural properties tell of a long history with Fudoin’s status as a premier temple in Hiroshima, with previous rulers being buried at the site.

After the atomic bomb was dropped, Hiroshima lost many cultural properties in an instant, but fortunately Fudoin was spared thanks to the geographical conditions. Fudoin is located at the foot of the mountain, 3.9 kilometers from the hypocenter in the city center, so it suffered no major damage and managed to retain its former glory.

After the atomic bomb dropped, survivors left the city centre to the suburbs, with a death march heading north, the exhausted survivors tragically became corpses and were buried along the road and riverbank. Fudoin temple became a shrine for paying respects to all the people who died in the local area. 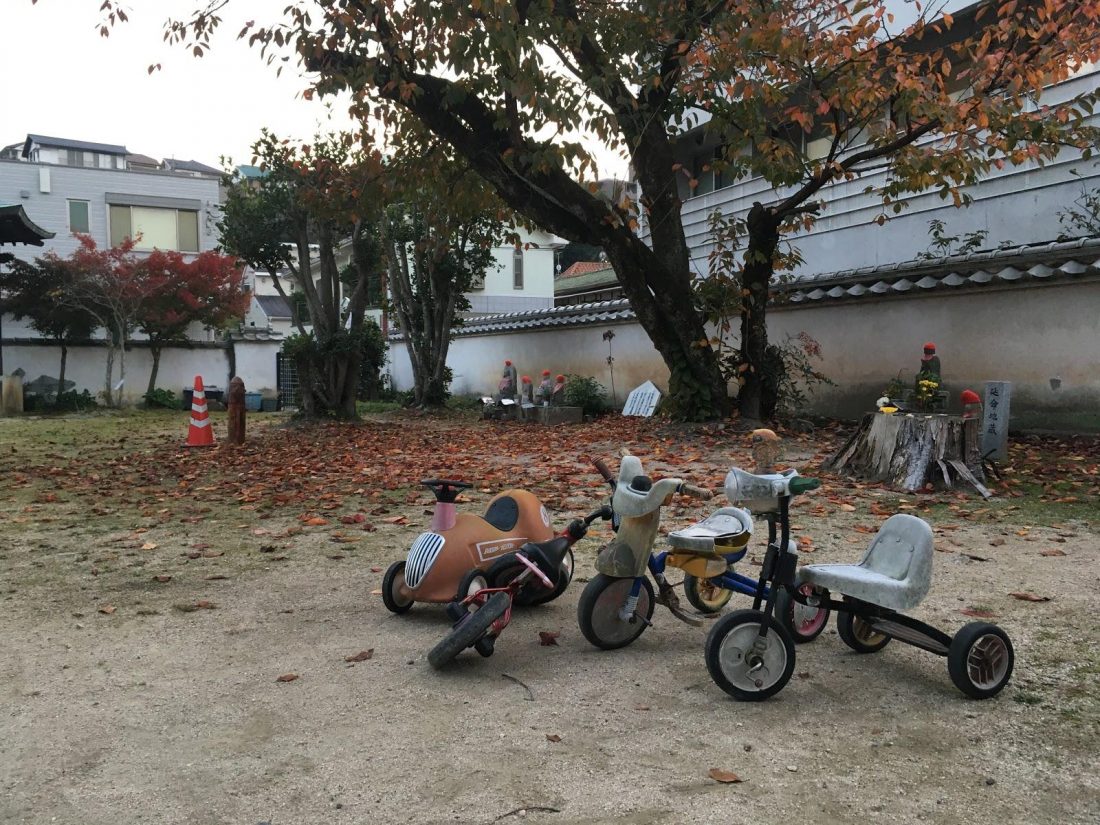 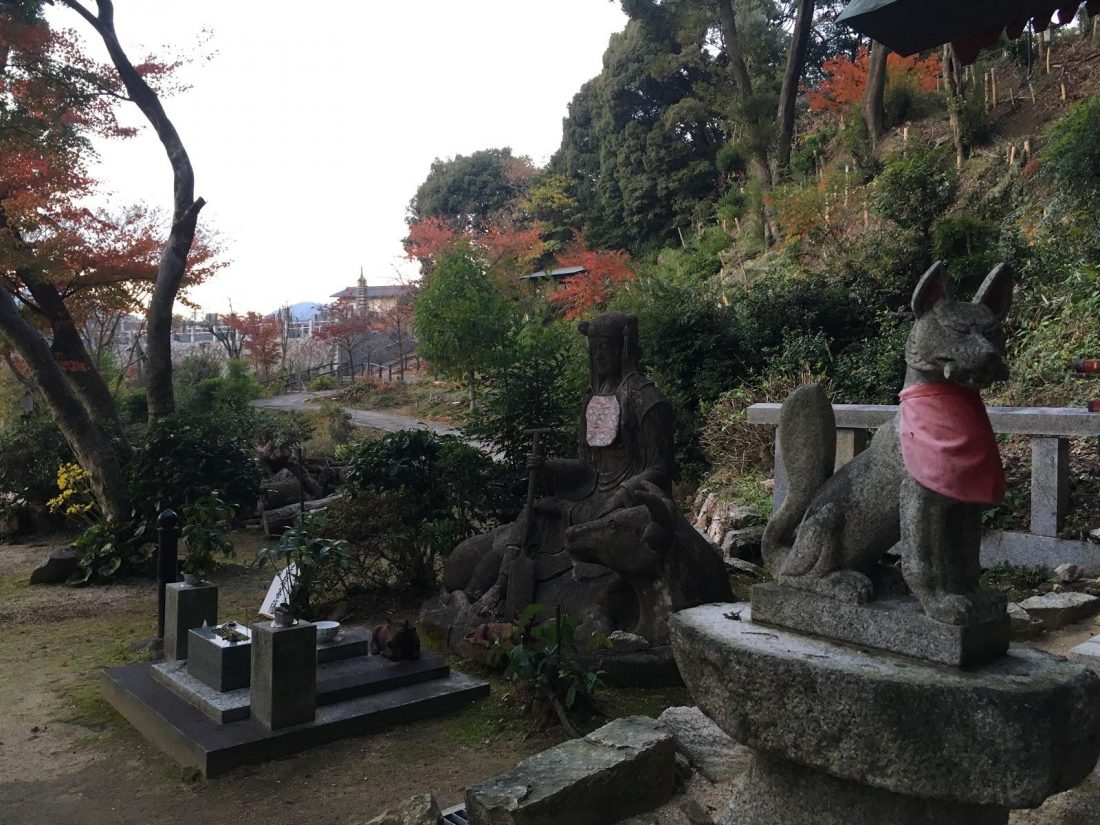 Perfect for:
Families with young children who want to let off some steam

Not Good for:
In a hurry for highlights
Needing crowds for validation 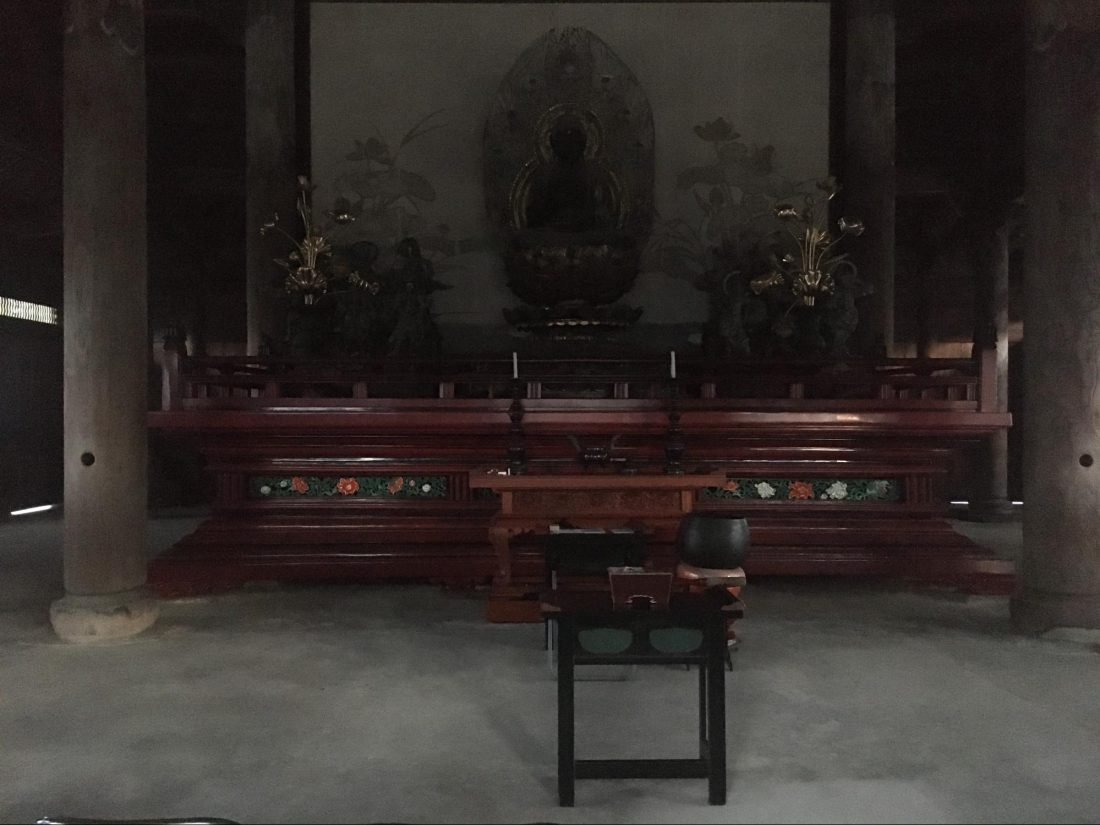 Fudoin is a lovely temple if you have the slack to appreciate it. Aesthetically ticks a lot of boxes. Could feel tedious if you’ve just been whirlwinding through the best of kyoto and are ‘templed out’. It’s a top class structure from the period, and is a prized piece of history for Hiroshima city which otherwise has a distinct lack of historical buildings in the city centre due to the devastation.

Nearby
Why not take a walk along the Ota riverbank to nearby Ushita?

The Ushita Total Park has a nice rose garden. Located directly behind the BigWave sports centre.