At certain points of the year, all the holidays seem to string together for a flurry of festivities. Where the string lies depends on the country, but from what I have observed, autumn and winter tend to have the months stuffed with causes for celebration. It generally begins with Halloween in the Western (or at least, the English-speaking) world, followed by Thanksgiving in the United States (as well as the infamous, subsequent Black Friday), before heading into the jam-packed Holiday Season in December. Japan has also jumped onto the Halloween bandwagon (minus trick-or-treating), and although there is a Labor Thanksgiving Day, it’s not a day for feasting like it is in the West. However, we do have fall festivals pop up here and there around November, many of which feature kagura performances alongside oodles of food stands. From then on, it’s illumination season and Christmas (mostly just the consumerist and romantic side) before we ring in the New Year. This basically means people get to pig out month after month on delicacies such as candy, pumpkins, chestnuts, mushrooms, sanma, tangerines, sweet potatoes, roast chicken, sponge cake, soba, shrimp tempura, ozoni, and grilled mochi, to name a few. 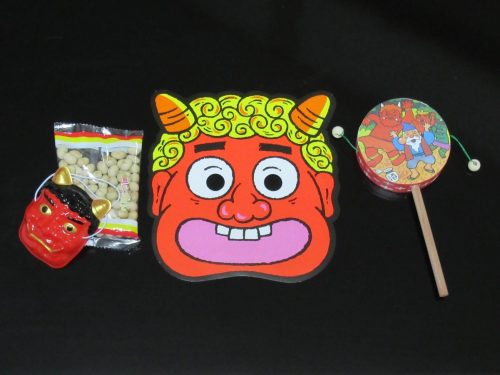 Though New Year’s may be the most auspicious occasion in Japan, one month later, another day to rein in good fortune rears its head, known as Setsubun. The exact date of Setsubun varies annually, but it will only ever be on the 2nd, 3rd, or 4th of February. This February was especially interesting as Chinese New Year, which is known in Japan as 旧正月 (きゅうしょうがつ – Old New Year), and since Chinese New Year technically lasts two weeks, this time, it ended up encompassing Setsubun on the 3rd, National Foundation Day on the 11th, and Valentine’s Day on the 14th, thereby multiplying the good fortune, good vibes, and good eats! Of course, like every other holiday in Japan, Setsubun comes with its own set of associated food and imagery: sushi, beans, and oni (occasionally translated as “demon,” “devil,” or “ogre). The point of Setsubun is to ward off evil spirits and misfortune–represented by the oni–and invite prosperity in time for the coming of spring.

One of the pivotal auspicious elements of Setsubun is the “eho,” or lucky compass direction. This so-called “lucky direction” cycles every year and is announced during the days leading up to Setsubun; the lucky direction for 2022 was north-northwest. On the evening of Setsubun, it is customary to make or buy ehomaki, which are fat, uncut sushi rolls meant to be eaten in silence while facing the lucky direction. A lot of consumers take ehomaki seriously, so in addition to supermarkets, gourmet eateries selling sushi will make ehomaki just for Setsubun and start taking reservations in January. This year, I decided to sample ehomaki made by Sushi Tatsu, a restaurant whose flavors I already adore year-round. 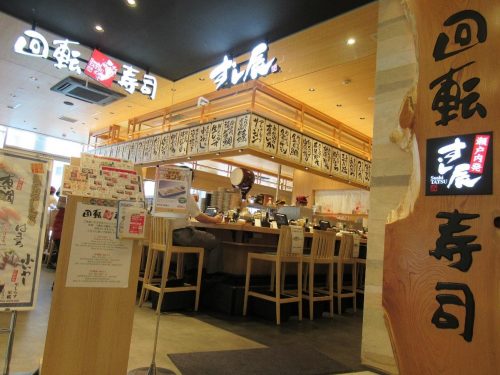 Reserving online was easy; I filled out a form indicating how many of what kind of item I wanted, and I simply paid when I picked up my ehomaki on February 2nd. Ehomaki can be filled with any ingredient the chef desires, ranging from a simple rolled omelet to sumptuous medleys featuring upwards of ten ingredients. In order to truly know Sushi Tatsu’s capabilities (as well as have ehomaki two nights in a row), I ordered both the standard and seafood varieties to stuff my face.

The ehomaki were packed tightly in these disposable boxes and covered with lids to prevent damage to the sushi roll. February 2nd was only the eve of Setsubun, but I immediately dug into the seafood ehomaki as soon as I got home because it contained fresh, raw seafood. After taking my pictures, I pulled out my smartphone and used the compass application to determine which way was north-northwest, turned my dining table and chair accordingly, and sat down to eat. This plump, seafood daimyo-maki contained tuna, yellowtail, sea bream, squid, shrimp, salmon, conger eel, flying fish roe, rolled omelet, cucumber, dried gourd, and perilla leaf. It was basically like being able to partake in the sushi-go-round at home, and that feeling when I was finished with it wasn’t unlike how I typically feel going home from a buffet. 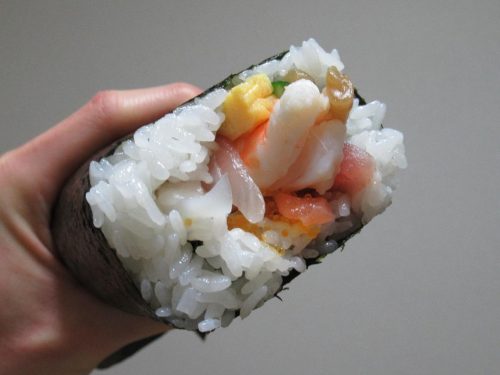 On February 3rd, I proceeded to chow down on a simpler–but nonetheless tasty–variety of ehomaki. The contents included the standard, tried and true ingredients for futomaki found in any sushi restaurant, which include rolled omelet, cucumber, dried gourd, carrot, spongy tofu, and mushrooms, among other things. Though not as fat as the seafood daimyo-maki, one box contained two regular ehomaki, which was more food for less money.

Once upon a time, sushi was considered a form of fast food rather than gourmet fare, developed as a method of preserving raw fish. It enjoys a lot more prestige today, yet retained its initial fast-food qualities as I squandered no time in devouring each ehomaki. They were so filling, just one roll could make for a meal in and of itself, keeping me rolling throughout the day or over the course of two days. The cost-effectiveness and the high-grade seafood rolled into one package are what makes ehomaki one of the greatest aspects of Setsubun. 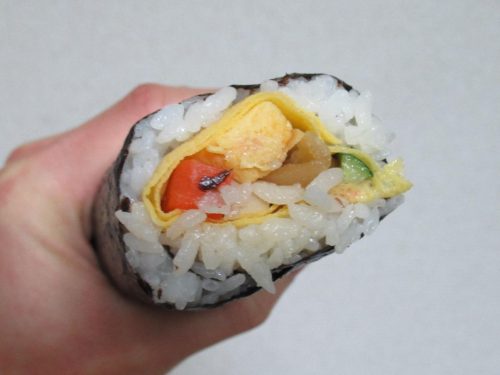 There are plenty of other delicacies to try during this time of year, whether they’re related to the holidays or not. To scope out my next Setsubun find, I took a quick trip to LECT, a shopping center in western Hiroshima City. To nobody’s surprise, the supermarket and restaurants here also had ehomaki for sale, but today, I would be on the prowl for another auspicious food. Before I would supposedly do that, however, it was necessary to sate my growling belly with a meal from one of the numerous eateries inside. 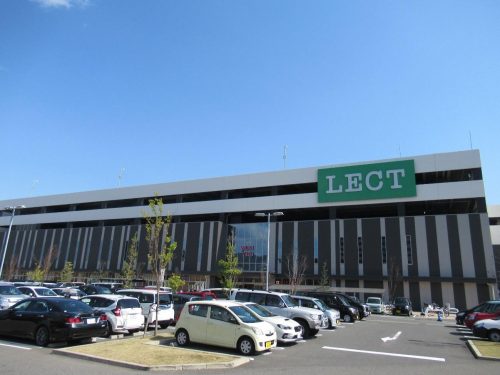 As it was the third day of Chinese New Year, I popped into a Chinese restaurant craving some fried rice. I ordered a lunch special, and within minutes, a salad, a bowl of egg drop soup, a plate of fried rice with assorted veggies, and a glass of tea graced my table. A fanciful feast on the dime for one, if I do say so myself, as evidenced by how rapidly I downed my food. 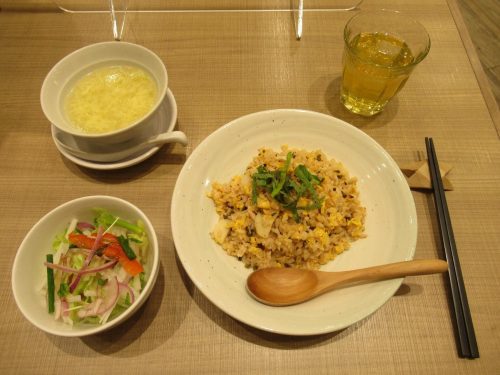 Of course, I also saved room for dessert, and as strawberry season begins around February, a berry sweet treat is exactly what I got. I followed up my fried rice set with some strawberry-topped almond tofu. It’s not your everyday recipe, but all the more reason to splurge and gorge! 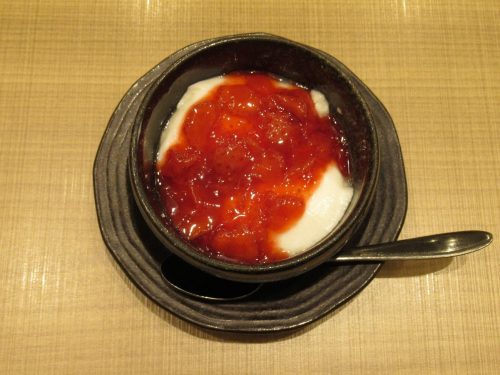 Limited-time variations on regular dishes can be found at virtually every eatery inside LECT year-round, so eating here never gets old. With my belly now full, I took a brief stroll around the mall, played a couple games at the Sega arcade, and went off in search of what I actually came for. It took a bit of wandering and pondering until I finally found NutsDOM, a store that specializes in bean- and nut-related snacks, whose LECT branch is actually the first in Hiroshima Prefecture. 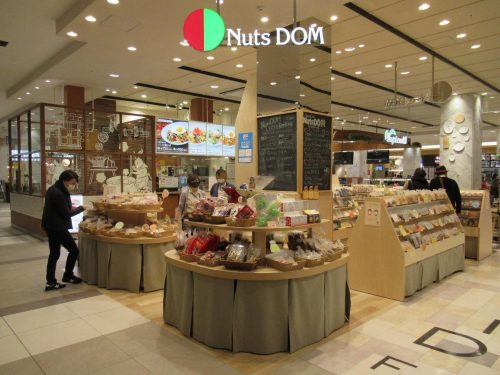 NutsDOM puts out delicious beans and nuts all year long, but from late January to early February, they advertise packets of 福豆 (ふくまめ – fukumame), or toasted, lucky beans to be thrown and eaten on Setsubun. The target audience seemed to be small children since most of the products included oni-themed masks and toys. I helped myself to a package on the top shelf which came with a miniature drum that makes noise when one twists the handle. On top of that, all purchases during Setsubun season came with a kids’ paper oni mask (pictured up top) that can be worn by looping rubber bands through the tiny holes on either side. 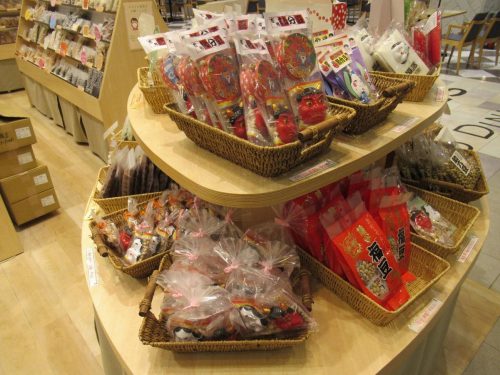 What exactly is lucky about these beans, you ask? To be completely honest, they are not much more than regular, toasted soybeans, but as mentioned above, it’s what people do with them that invites good fortune. The nationally renowned tradition known as mame-maki involves throwing these lucky beans either out the front door or at somebody dressed up as an oni (this would probably be the father at home and a teacher at school). Everyone chants, “鬼は外、福は内 (Demons out, fortune in)” as they pelt the “oni” with the beans, and once the “oni” is out the door, the door is slammed to ensure that demons, whether figurative or literal, never set foot inside the household. Of course, since doing mame-maki at home results in a mess, and wasting food is bad, everyone picks up the beans afterwards, and the beans that weren’t thrown are to be eaten. 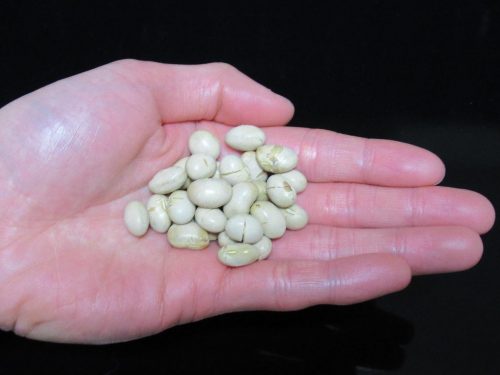 Everyone should eat a number of beans equivalent to one’s age plus one; the extra one represents the wish for good luck in the coming year. Obviously, this means that the older you get, the more beans you have to down, but if you ask me, so long as all the beans still fit into the palm of one hand, it’s all good. Packs of lucky beans will usually contain more beans than the combined ages of everyone in a nuclear family, but there’s nothing bad about eating more than one’s age in beans, so have at them if you wish.

Setsubun isn’t just something to be observed at home, as preschools, day care centers, and other educational facilities may go all out as well. Young children learn all about Setsubun and oni during the weeks leading up to the holiday through the various story books they read and impressive oni-themed crafts they make during class. On the day of Setsubun, one of the faculty (unbeknownst to the kids) will dress up as an oni and visit the classrooms one by one. Since performing an honest-to-goodness mame-maki in a school would generate too much waste, too fast, the alternatives include using soft, plastic balls instead of beans, or simply throwing unopened packs of lucky beans so that they can be neatly picked up and consumed later. The reactions from the students will vary depending on the authenticity of the costume as well as the age of the kids; the ones at the school where I taught on Setsubun took it rather well and were quite courageous.

In years past, I’ve seen episodes of tykes bawling their eyes out or paralyzed by fear, hindering the progress of mame-maki, but I suppose such incidents make for more entertaining stories. Moreover, since Japanese kindergarten teachers have a duty to capture some of their classes’ most memorable moments of the year on video, Setsubun is a gold mine for hilarious content. All is well when the costumed teachers reveal themselves, and at the end of the school day, the children take home their Setsubun crafts to continue the celebration at home. 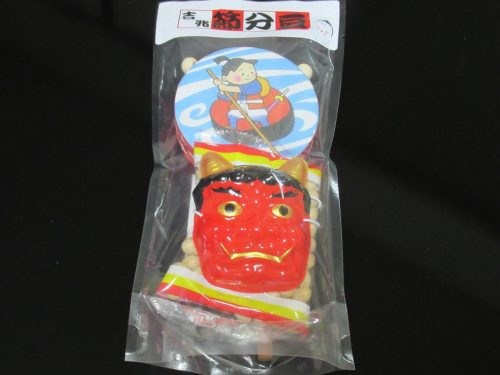 Indeed, there is no end to the number of holidays celebrated during the winter, observed for a plethora of reasons. They may take on a variety of names, like Chinese New Year, Groundhog Day, or Setsubun, but the intention is usually the same: to wish for a swift end to winter and welcome the coming spring. Traditional Japanese winter holidays may be heavily family-oriented, but even without a family in Japan, it’s more than possible to enjoy the holidays with delectable seasonal cuisine at home or in a restaurant, as yours truly did. February may not be an ideal time for many tourists to plan their vacations to Japan, but if your travel plans here end up falling within the first week of the month, you’ll be in for a treat. From here on out, winter will be over before we know it, and Japan’s myriad flowers will show their faces to the world once again. From here in Hiroshima, I’d just like to wish everyone out there happy winter holidays and may Japan one day open its borders to tourists once again as the flowers do every year.